A Petal Among Thorns [Completed] 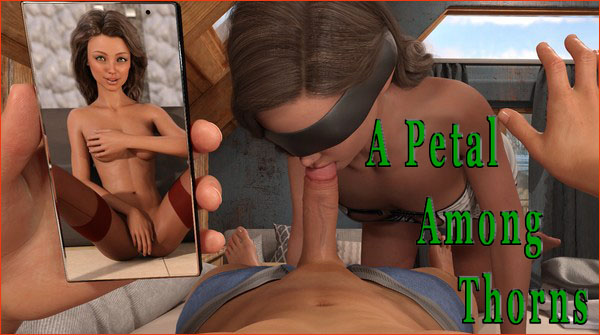 A Petal Among Thorns asks the question of whether you can indulge in the forbidden fruit without falling prey to the consequences of surrendering to something considers to be taboo. You’re a middle-aged man on a winter retreat with Petal after your failed comedy tour. A relaxing vacation soon presents new feelings of lust towards her. As she begins to show affection towards you in a more sexual manner, you begin to give in to her.


Changelog
Final
Hey fans!
I’ve got the final release of A Petal Among Thorns. I appreciate all of your support. Thank you!

In lieu of a progress report, I’m going to have this post here. I’ve started some of scaffolding of A Moment of Bliss. I’ve created two new characters, built the intro, and today I’m going to work on building the main house. There’s a lot to do, but I’d love to have a release out at the end of April or beginning of May. I’ll certainly keep you guys updated on the progress, and throw some screenshots your way as I have some.

I am going to try to manage some interactive elements in this sequel. There will be clickable objects in scenes and a phone mechanic. However, it won’t be a sandbox. Petal will be a major character. So far there are four love interests. You’ll get to know Rose and Bliss more intimately, and there’s a fourth girl you’ll meet outside of home.
Currently, the phone mechanic is planned to heavily involve Suzi. Suzi is the artificial intelligence that you would have met in Penny’s game if you played it. If not, don’t worry! I’ll introduce you to her in A Moment of Bliss.
All this is concept. Any of these features and ideas can change depending on how progress ebbs and flows.

Please enjoy the final build of A Petal Among Thorns.