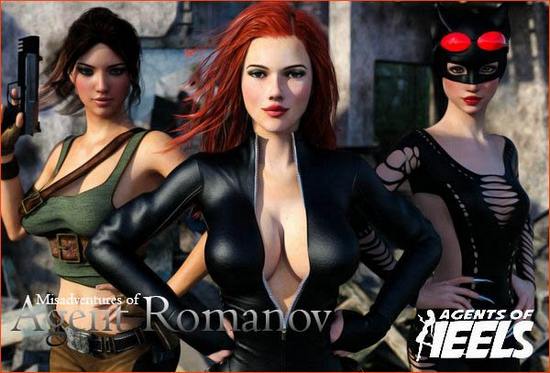 Agent Romanov is an active Agent of Heels and takes part in missions every now and then. Some of them end up slightly worse than anticipated, but she has never found herself in a situation she couldn’t handle on her own, not until now that is…


Changelog
v0.25.0
Content:
This version is the opening movements in a multi-phase End Game final Mission #3 for Natasha and the initial Agents of Heels instalment. Its content is solely dedicated to “Heels Nat”, the paths of Good Nat and the Corrupt Nats that did not side with Ivy/Maeda previously. Later updates will cover the remaining Nats mission Intros.

A total of 7 new Main Story Scenes for Heels Nat, and 4 scene variants, all as a part of Mission #3. Unlike previous updates, this final Mission runs in sequence, as these smaller scenes are blended one after the other to make on large meta-scene that is the Mission. This scene will also blend with the end of the Mission #3 preamble scenes as well.

2 Introduction routes to the mission action, dictated by Nat’s personality, Good or Corrupt, with a Corrupt Variant for one depending on Mission #1 decisions.

2 Perimeter Action routes, again dictated by Nat’s personality, Good or Corrupt, with distinct x-rated results based on the path.

1 Initial Assault scene, common to both Good and Corrupt Nat, with each getting its own text variants on the experience.

2 Inflection Point routes to end Phase 1 of Heel’s Nat’s mission, dictated by the player’s previous side content completion efforts and choices. Each of these two routes come in two text variants, one each for Good and Corrupt Nat, making it 4 scenes in total. X-rated content is also found here, though vary in intensity across the paths. Heels Nat’s Phase 2 will pick up directly after both these points in a later release.

4 mix-and-match paths through the first phase of Mission #3 for Heels Nat, as past consequences, new decisions, and potential allies all come to bear on Nat as she makes her way to her biggest battle yet. That’s 2 distinct possible mid-mission outcomes attainable for Good Nat and Corrupt Nat (same set for both), decided by the player’s previous actions to date.

Among the new scenes added, there is included notable length 2 x-rated sequences of mid-mission sexual encounters. These are tailored to fit the narrative and the feel of a mission as best suited.

– There is no added time in playable days to this version, as the game is in its final stretch now. Revamps and improvements to the gameplay sections will come post Mission #3.

v0.24
Who’s ready to get down with their Bad Nat selves? Huh? Well have we got the thing for you! It’s always a great day in our books when we have a release, and today is one such day! It’s time to suit up again and take New York by storm, as only our red head agent can, now that Agents of Heels is updated and expanded! Bad Nat’s path to her vengeance and to Heels’ door now paved and it’s up to you to lead her each step down until we meet with our fated ends. Just how will it go, and who can possibly stop her now? We’ll find out as Mission #3 comes to bear at last!

Content:
This version is the continuation and end of the End Game phase’s preamble, specifically and heavily focused on Bad Nat’s introduction to Mission #3 and the Solo loyalties path to the final game phase. There is also some final preamble content added for Corrupt Nat, by popular demand.
Heads Up!While not necessary, it is advised that Bad Nat players now, like Good and Corrupt Nat players were in the previous version, keep a copy of a save of your playthrough thus far, as once the introduction to Mission #3’s day begins in this version, you will be kept within event line until the conclusion of the Mission for all future content versions.
– 3 new Main Story Scenes for Bad Nat. 1 is a short reintroduction to the main story, reengaging for the beginning of Mission #3, as well as being a notice to players to ready for the End Game. Bad Nat’s Mission #3 begins in scene 2: tired of waiting and building up her newly awakened Ivy powers, Nat readies herself for the fight of her life ahead and she knows there’s no going back. Finally, if she’s burning bridges, she’s taking some things with her. Big things, with a lot of power!
– 1 new Main Story Scene for Corrupt Nat, for those sided with the villains, picking up where the last left off. Now that a tentative trial run as the Maeda Cartel’s Captain and Tatsuro’s personal bodyguard is on the table, it’s time he dress our girl in his colours, or at least send her out to fight for him in a new uniform of less than tactical design and with no regrets left between them.
– Added 3 playable days to Bad Nat’s playtime (up to Day 25 – Final Day), matching Good and Corrupt Nat’s opportunities and the Mission timeline. Bad Nat now has all the time needed and more to complete all side content and exploration at an easy pace before Mission #3 automatically begins. Please note, the other Nats have not been given (or need) any additional time.
– 73 new CGs, ~21,650 words of new text.

0.23.0
– Content
This version is the continuation of the End Game phase for Good Nat, and the beginning of the same End Game for Corrupt Nat, including both sets of loyalties. From here on, the defining feature of the paths is who you’ve chosen to side with: Heels, Ivy and Maeda, or Solo (coming later).

-3 new Main Story Scenes for Corrupt Nat, for those who have stayed loyal to Heels. One is a short reintroduction to the main story, kickstarting the Mission #3 and acting as a notice to players to ready for the End Game. Nat’s Mission #3 kicks off with some worry as she deals with internal affairs. She’s got to get back on her feet long enough to get the job done, but with time not on her side, she’ll need some new tools for the job, and she’ll get them.

-2 new Main Story Scene for Corrupt Nat, for those sided with the villains. Maeda has found himself on the backfoot in a dangerous game, and he’s only got one chance to escape his fate. Luckily, he’s been working an inside source, so what will Nat do when push comes to shove?

-1 new Mission #3 Scene for Good Nat, picking up where her last encounter with Scout left off. A detour on the way to HQ is a risk, but its needed, because without every tool in her arsenal Heels is in real trouble. A hero has got to rise to the occasion.

-Added 3 playable days to Corrupt Nat’s playtime (up to Day 25), matching Good Nat’s and the Mission timeline. Corrupt Nat now also has the time needed to complete all side content and exploration at an easy pace before Mission #3 automatically begins. Please note, Bad Nat has no additional content, or time.

– Features
This version contains the first scenes in the preamble build-up to Mission #3 for Corrupt Nat and continuing our End Game phase for the Good Nat path. (Bad Nat still to come). As of this version, we now have 2 of the 3 Nats we’ve come to know and love toeing the line on the opening of the Main Mission #3 action.

2 New Outfits, including 1 new permanent looks to see Nat through to the final stages of the game. Nat’s Good/Corrupt/Bad qualities begin to take second priority to her choice of allegiances as we reach the climax action of Mission #3 now for 3 of our 4 distinct combinations of paths.

-The birth of an icon is complete! The Black Widow rises!