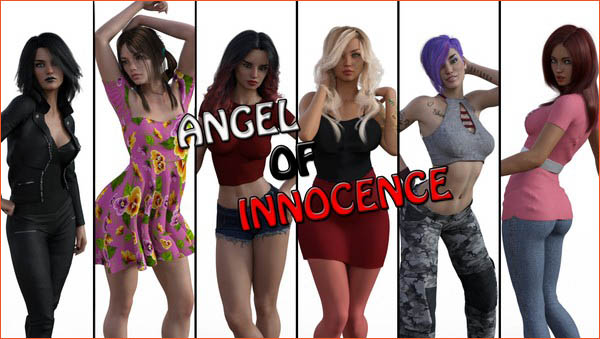 You are a young, tendentious journalist, who started now at his new job. Your dream is that you want to be a sports reporter but before, you need to climb the ladder. Your first job is that you need to gain about a famous singer’s personal life. It’s not the best perspective but great possibility that you will gain a name and respect, in this profession. Here starts your adventure… Whether do you succeed? Or it will be too much for you? To be or not to be? These depend on you and your decisions, during the game Angel of Innocence.​

Angel of Innocence v0.5b
Added a missing scene (Business Meeting) with 85 renders
Reworked ~ 50 renders
Decreased noise problems on the pictures
Converged every renders into jpg (Game size has been smaller)
Some changes on the main menu
Fixed a few bugs

Angel of Innocence v0.4
Added 394 renders with 39 loops
Started one new route
Introduced a new character
Naughty Point (NP) system – Collect them with your decision for different scenes in the future.
Added a penis texture for MC (Not everywhere, there is some bug with it. I’ll solve this problem in the upcoming remastered version.)
Added bonus scene (Winner of the Poll)
Changed main menu and game menu image (Winner of the Poll)
Some crash problem is fixed.

Angel of Innocence v0.3
Added 181 images with ~ 10000 words
Added a Bonus Scene by free poll of Patreon.
Added a new route. (Nicolette)
Added a new character (Nelia’s manager)
Added a new feature with the hidden point system.
New Nelia is completely finished on the Day 1 (Photo session, Locker Room and Club)
Changed some codes in the previous versions (Because of that, your old save files don’t work anymore. Sorry for that, but if you don’t want to start a new game, use my save games!)
Changed the main menu image (April, who is the winner of the first poll) and the design too.
Sounds are disabled.
Day 2 morning with Sandy is fixed.
Fixed some old pictures.
Fixed other bugs.