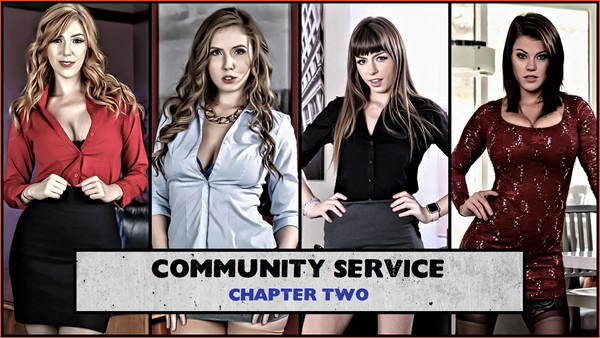 After an encounter with an unusual storm, the main character and the people around them start to develop abnormal abilities, known as Powers. With a power of your own, and a dark vision of the future, it’s up to you to find your place in the chaos, and prepare for what comes next. Community Service will see you interacting with a wide range of characters across several locations, completing quests and making choices that will affect the future of the narrative. Each character has their own personal story that all works towards a final ending point.

All profiles have been updated to a new format
All profile images have been changed, altered, or renamed
The credits button now links to an external Google Doc with the full cast list
Added the option to change the MC’s name from the Settings Menu
Added Trust code for Anya, Chloe, and Lily C
These characters can now reach Trust status
Trust Status unlocks when returning to the characters after their background event
Added Lock code for Alex, Anya, Ava, Chanel, and Veruca
Through player choices, the content for these characters can become locked and unavailable
This was always the case, but code has been added to tag when the character is locked
Added an easter egg that leads to the Debug Menu

All Interactive Sex Events overhauled
New format
Progressive Unlocks
Added text and dialogue to each scene
Several source files have been renamed
Several UI adjustments
New backgrounds and reworked sidebar
Re-added the UI Toggle Button
Since the beginning, toggling the UI would make the entire UI bar disappear. This has now been fixed.
Changed the starting passages slightly
The majority of profiles now contain the character’s timetables
Some characters are unaccounted for, and so their timetables are unknown
Added some hidden easter eggs