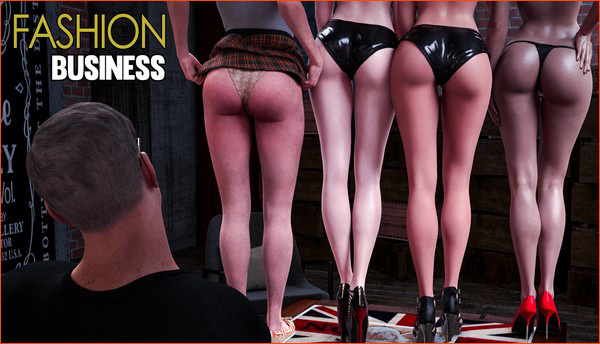 In Fashion Business you will play as a rich bitch named Monica. She is a big boss and owner of a modeling agency, her life is sheer luxury. Power over people is all that interests her. But at one moment everything can change dramatically. Witness her fall to a cheap prostitute, find out what awaits her!

Improvements:
Gallery was updated. You can now stop replaying the scene in the gallery by pressing the «Stop» button.
Bug fixes.

Episode 3 v12
This update includes 1774 cool images, many hot animations, and 20223 words worth of dialogue!

EP3 v10
This update includes 1240 new pictures and some hot close-up animations!
What’s new:
Office: casting scene at Mrs. White’s apartment. Is Monica brave enough to do it? (big animated scene + extra animated content in the Extra version).
Home: Fred will put forward the new conditions of his professional game to Monica. Can Monica prove she’s a professional housewife? 😉 (big animated scene).
Falling Path: more work for Mommy. Two new scenes with two new clients for Monica (two hot animated scenes).
Victoria: what will Melanie have to do for her friend Victoria this time? (animated scene).
Shiny Hole: Monica starts attending to her royal duties (animated scenes + additional animated scene in the Extra version).
Improvements:
Fixed bug with the starting of quest “Love Triangle”
Other bugfixes.
Announcement:
Due to techincal problems, my website can be not accessible for some days. I’m working on it and the problem will be fixed soon.

Fashion Business: EP3 v9 has been released!
This update was delayed a little bit, but I hope I can make up for that with its quality.
This update is packed full of interesting scenes and hot animations!
New stuff:
Office: A new hot photoshoot, and a meeting with the head of a rival magazine (big animated scene).
Home: Monica can get her former home back, but what will she need to do to achieve that? (a number of animated scenes, an additional scene in the Extra version)
Falling Path: Monica can begin working as Mommy’s street girl. Getting her first client (animated scene).
Shiny Hole: Claire’s hot private dance with an extra ending (animated scene in the Extra version).

Fashion Business EP3 v8
This update consists of 1137 new pictures and a ton of cool animations!

Ep3 v7
What’s new:
— Biff: New auditions. Things are getting more and more fun. (animated scene + extra animated scene)
— Office: Continuation of the department’s story arc. Intrigue and blackmail.
— Victoria: Unexpected details of Victoria’s life, as well as the continuation of her friendship plans. How will those affect Stephanie and Melanie? (animated scenes)
— Shiny Hole: Claire explores the new horizons of her sexuality.
— Falling Path: In order to stay afloat, Monica has to steal clients from prostitutes. What will end up happening with her because of that?

Bug fixes and improvements:
— You can now set a custom name for your saves.
— Implemented scrolling through text by pressing the space bar.
— Bug fixes

Ep3 v6
This update includes 1772 new images and a lot of animations. I’ve also experimented how animations are presented in this update. I hope to hear your feedback on that!
What’s new:

VIP-Escort: Monica becomes the hotel’s administrator. She can now distribute clients to the girls, fine the girls and hold staff meetings. (An extra scene during the meeting)
Julia: Monica doesn’t help Julia around the house and doesn’t chip in their shared budget. How will Julia react to that? (an extra scene)
Marcus: Monica continues to visit Marcus. To initiate this quest, load the appropriate save game or start a new game and choose the “Marcus’ Training” plot line. (animated scene)
Falling path: Monica meets Misty and gets an interesting offer from her. Will Monica be able to get what she wants? (animated scene)
Falling path: Monica takes a walk around the park and meets the friends of Tim and Tom. What can this lead to? (big animated scene) (one more scene in the extra version)

Improvements:
A number of bugfixes.
Thank you so much for your continuous support! This game could’ve never existed without you all! You guys really help the game grow and improve!

Ep.3 v.4
Fashion Business: EP3 Crossroads (v4) has been released!
I’m excited to present you another regular update for the beloved game, “Fashion Business”!
As always, we did a lot of work so the update could be released on time. Your support is very important for me and our team so I’m doing my best to make you happy.

This update consists of 1130 new pictures and 64 animated clips!

Fixes:
Fixed a bug that caused the game to crash during loading
EP2 part 1 renamed to EP2.1: New Life, Spanish language support added. Bardie’s storyline removed (I had to do it because of the abuse).
Other small fixes

Ep.2.2 v0.17
This update includes 1704 new pictures and 124 cool animations!
What’s new:
Private presentation for the investors. What else will Monica have to do to convince them to invest in her magazine?
VIP Escort Service: meeting your former fan. Will Monica be able to use him to solve her temporary troubles?
VIP Escort Service: Start of a “friendship” with escort girls.
Philip: Monica receives new experience. (extra scene with extreme content)
Betty: continuing to strengthen the relationship between neighbors. A faithful wife. New experience.
Falling Path: two new big events in Monica’s apartment (an extra version scene).
Shiny Hole: Claire’s problems. Will Monica help her or will she not involve herself? And who will she use to help Claire? New big quest.

Improvements:
Events list: a new system of quest description. Read about it below.
French language support added (98% translated, in progress)

Ep.2 v0.13
A new presentation for the investors, including a new hot photoshoot.
Continuation of the escort job. Big animated scene.
Monica’s new adventures in Shiny Hole. Dancing completely naked for the bar’s crowd. A new private dance (an additional animated scene with Joe in the extra version)
Victoria visits Monica’s office. Monica introduces her to the employees. A meeting with Melanie.
Continuation of Julia’s love story. Living together. A ton of mini-scenes. A new place to sleep in.
It’s possible to come back to jail and spend a number of nights there with one of the other prisoners (an additional animated scene in the extra version)
A meeting with Marcus. Training begins. Continuation of the main plot.

Fixed and improved:
A bug that caused crashing during the scene with Melanie.
Achievement update bug.
Problems with story quests if you spend the night in the slum apartment.
The problem of breaking quests when the right mouse button is pressed during the dialogue. A lot of mystical bugs are related to this.
The ability to reset Shiny Hole quests after loading v12 (you need to enter the pub)
The ability to send a crash log with one press of a button.
The translation engine was changed. Lower memory consumption. Faster game starting.
Show the game menu by long tap on Android devices.

Fashion Business Episode 2 v11
What’s new:
Public event. Monica is living in the high society. Many of her old and new acquaintances will meet her there. Monica will have to do her best to conceal her current situation.
New hot photoshoot.
Escort jobs. Two big scenes. A lot of H-content.
A new scene with Phillip
Shiny Hole. the first private dance.
Slums apartment. New place to live in. Bonus scene (Extra version)
A new chapter in the romantic relationship with Julia.
Revenge quest continues.
Achievements list is now a gallery (beta). Some scenes are still unavailable.
The Cheat menu is now available in all versions. (click on the painting in the former Monica’s room)
Fixes and improvements:
You can now skip to a designated day of the week.
Fixed a bug with inactive bartenders in the Shiny Hole.
Fixed the bug regarding the quest restart in the Shiny Hole.
Performance improved
Other minor bug fixes
Enjoy the Game!