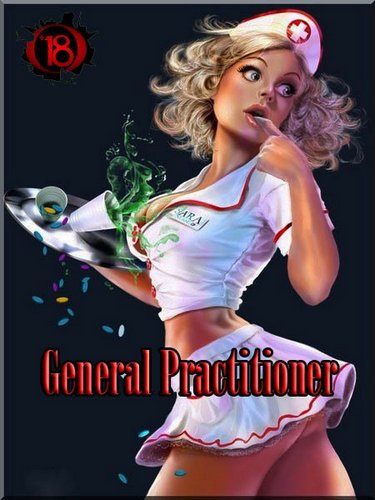 General Practitioner is a game in which you play the role of a doctor who runs and operates a small clinic in the city. The playstyle is a visual novel. You will meet many characters, not only patients, but also employees, casual acquaintances and much more. You will earn money for each visit, and with this you will have to pay your employees and medical instruments. More equipment will open up more patients. Of course, there will be sex in the game. But you can’t just fuck everything that moves, because you can scare patients away and the clinic can close due to debt. Being a doctor, though, is a good way to get people to undress, but it depends on the purpose of the test, the patient’s trust in you, and even their mood.


Changelog
v0.0.9
GENERAL:
General Bug Fixing
Added more than 120 new HD pictures
Removed the option to «Work» at night
Added 10 casual conversations with nurses whenever you go to the clinic. Conversations change depending on the nurse you hired.
Some medical jargon has been simplified throughout the game. I revisited many statements and changed them completely to be more understandable to the general public.
Added 25 medical «tests» to earn knowledge points. To do such tests you need to choose «Study» from the daily choices screen. Some tests might appear more than once, but that is working as intended as you will find it easier to earn points as you also learn some medical terms and conditions.
You can access the medical tests by choosing to «study» on the daily planner.

General Practitioner 2 v0.0.8
GENERAL:
General Bug Fixing
Fixed an issue which, in some cases, caused the descriptions for Andrew and Julie’s stats to be wrong (i.e. «Nymphomaniac» with a sexpertise of 0)
It is now possible to change Andrew’s nickname «Andy» when starting a new game.
Andrew’s nickname «Andy» has been fixed to include the customized nickname throughout the game
Fixed a crash during Johnathon’s examination
Fixed a typo during Jennie’s examination referring to her ailment as «Stomach Pains» instead of «cough»
Fixed a crashing issue during Daniel’s examination

STORY:
Added story events for Nurse Nyarai, playable with both Andrew and Julie starting from day 35 (if Nyarai has been hired, of course)
After day 40, the two will begin seeing each other again when Nyarai visits the gym (or by turning on the «Always available» option in the game’s settings).

Andrew or Julie will have a personal tale that will unfold alongside with Nyarai. You must pick who the nurse will be most closely engaged with, though. You can make that decision as soon as Nyarai’s narrative begins, and it will have an immediate impact on the narrative from thereon.

STORY:
Added story events for Andrew and Julie when you first stay home after day 12 and day 18
Added interviews with Nyarai and Billie
Added house pool scenes for both Andrew and Julie
Added the option to choose your Registered Nurse. This will influence the game’s story, personal «quest» and the financial outcome of the clinic. Some of these features are still being worked on.
Please note that paying nurses salaries has not still been added to the game. You can enjoy them for free right now.
Added an «after-exam» date event with Margareth, provided you completed her examination succesfully and you have enough relationship with her
Added a new story event with Julie at the bar. The event unlocks after day 17 and only if playing Andrew. The event will be linked to an examination which is still under development
Added an introductory dialogue with Dalila, a new character representing the Medical Board. She will visit you if you fail the exam with Margareth. She will eventually meet you in the future, if you did a good job with Margareth though.
After day 26, if you examined Johnathon with Andrew, you will know about his fate, whether you were able to save him or not.
After day 30, if you saved John’s life, you will meet him again when you choose to «Stay home.» If your settings for Andy’s sexual orientation are «Men» or «Both» you can accept or refuse a dinner invitation by John
Next patch will include the dinner and the possible outcome

General Practitioner 2 v0.0.5
GENERAL:
General Bug Fixing
It is now possible to customize the name of the main characters and their nicknames
Added an option to choose the game’s starting difficulty. If set to «Arcade» you will start with 10 Knowledge and Bedside Manners points, while «Simulation» will give you none
Improved Codex’s interface
Nurse Jane Harper has been added to the Codex (Characters)
Changed the value for corruption gain in various scenes
Added «STATS» section to display Corruption, Sexpertise and Looks for both Andrew and Julie in their Codex entry
Added notification when your relationship with Jane changes
Added a «Day count» to the message «What should I do today?»
Added an option to choose if characters should always be present when you visit a room or place. If set to YES you can find them everywhere you go.
This option has been included for players who do not want to look for their favourite characters to interact with, and to better allow them to explore every dialogue added to the game up until now

General Practitioner v1.9.1
GENERAL:
General Bug Fixing
Fixed an issue during Kavitha’s exam
«Strip Learning» event has been fully-added to the «Teaching Medicine» DLC story arc
VNMODE: Claudia won’t be upset with you anymore if you told your niece to pursue her dancing wish

These examinations won’t be available in EXAM MODE as it is linked to the story. However, you can play it by loading a save right before the game’s credits.
Brian’s examination will be available only if you hired Dr Borelli.

General Practitioner v1.8.1
GENERAL:
Added an option to turn off NTR Content with Rita when starting a new game in both Visual Novel and Story Mode. You cannot change that option once the game’s started.
Fixed an issue which prevented, in some cases, to play the «Physician, Heal Thyself» doctor’s own examination by his relative. The issue occurred if you didn’t hire all available physicians.
This examination is not available in Visual Novel mode.
Google Analytics’ choices tracking system has been removed from the game.
Various bug fixing
Fixed a crash during Katia Lopez’s 2nd examination when performing MRI or Urinalysis
Fixed an issue which awarded -5 points for not performing an ultrasound exam on Felicity when it was not intended to be available.
Current release number has been added in the main screen on the lower right corner
Fixed an issue with Maryanne’s examination not giving you the right points and outcome for your choice to call social services.
Changed the way you can dismiss Lacey Greene when she comes for her third, fourth, and fifth examination.

EXAMINATIONS:
New exam available: Kavitha (ID Code 6082756276). This examination has been written upon request as a reward for a pledger on Patreon. You can play the examination in EXAM mode and in Story mode after October 23rd, in-game time.

STORY:
A new ending and new dialogues have been written for Rita if you disabled the NTR content.
A new fully dialogued sex scene with Rita has been added if you follow her path and disable the NTR content.

General Practitioner v1.7.1
— Erika’s «good ending» has been rewritten and fixed. If you had a relationship with her and earn enough points a new scene will unlock with her at the end of the game
— Achieving the «good ending» with Claudia has been made slightly easier by lowering the number of points needed for it. All the other conditions still apply (i.e. choosing her as you romance interest).
— Added a dialogue option to dismiss Lacey Greene after her second examination when she comes to the clinic. She will be assigned to another doctor, leaving your care for good.
— Benedetta Borelli is now correctly referred to as «Psychiatrist» instead of «Psychologist».
— Fixed an issue where, in some cases, you could have repeated the same examination more than once

General Practitioner v1.5.2
Updated Codex information about the SARS-Covid-2 disease
Made small modifications to Hann’s exam’s conversations to update it with new Infos about the SARS-Covid-2 disease since it was released.
Fixed an issue which caused Katia’s exam to crash
Fixed an issue which caused gaining money from staff to be unavailable if the option to show the daily report was set to OFF

Cheats
To bring up the console it is «right shift o». Not zero but o.