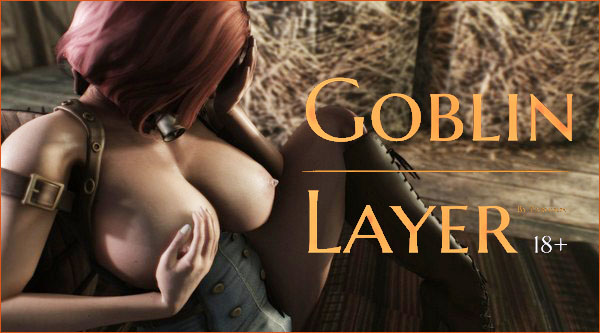 Goblin Layer 0.42.6
Art/Scenes️
Added in final pinups/Romance/Character cards, inluding some spicy ones, for Amazon, Bar Girl and General Goods Girl, hereby known as G.G. (according to the poll results).
A mildly spicy new scene in the Capital City… (during night time, look for someone stuck in a wall — east/business district) (animated!)
How to get to Capital City? Either during the Watertown quest, or afterwards (clear the Overrun Outpost first)

Gameplay️
General Goods Girl, hereby known as G.G, gets a little dialogue adressing the name change (during your first meeting)
Randomized greetings for the guards in Hubtown. I will probably use this technique more often for random npcs in the future
Changed the district names in capital city
An abandoned house added to Hubtown. But why? No reason. For now. At the moment, its a slightly safer place to save when moving from one version to another, since there’s no scripts/events in there.
Updated Hall of fame
Updated Cheat Room

Game
Frontier Conquest — New Mission
Some small dialogue for Hobina in the game + nametag
Added Chapter 5 to Chapter selection, might need some fixing in future tho
Travel back to Capital City whenever you want (accessible after finishing the new FQ mission)
Skip video plugin disabled by default now (its fairly obsolete now, and was causing issues for a small group of people)(If you want it back, its in the optional fixes folder + instructions)
Small notification when Quest Guide get updated (Just once or twice at the moment, I’m testing it)
Priestess Bonk attack — adjusted hit rate/accuracy
Priestess Holy Light attack — slighly increased cast speed
Balanced some encounters
Fixed up the Quest guide with proper images and updated texts
Updated some item icons
Small edit to the main menu options
Updated Cheat Room
Updated Hall of Fame