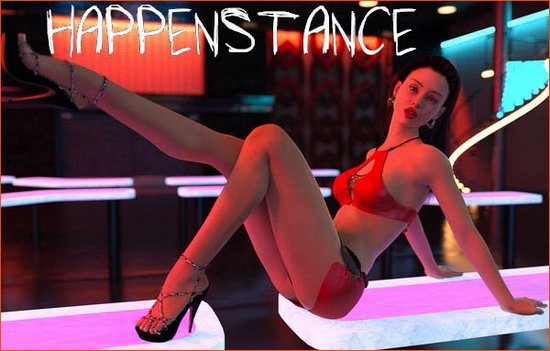 
Changelog
Update 1.80
Important: There is a choice added before going to sleep to proceed with scenes. If you’re last save was after they slept on Day7, just rollback to get access to the new scenes.

Changelog:
Progression of story Happenstance.
Changed main menu elements to better suit the theme of the overall story.
Changed screen elements, as with above.
Added Continue button on main menu which loads most recent saves, including auto saves.
F5 and F9 keys are bound to quick save and quick load respectively.
Change quick menu from default text buttons, to icons. Removed some redundant options as well.
Corrected typos, still a WIP.
Fix some minor bugs.

Update 1.75
The year that never ends… How are things going on with everyone? It’s still lockdown here. To be honest, it’s kinda rough on my end. So many things that needs to be done that cannot be done online. I’m really having a hard time working on the game with so many things on my mind. Hopefully a vaccine will be mass-produced soon so we can get back to our normal lives.

Happenstance Update is kinda short this time around. No sugar-coating it. I wanted to finish Happenstance Day 7 before posting but it has already taken too long. I don’t really have much to say other than apologizing for the delay. I just can’t seem to focus on working on the game with so much going on in household. Will be grinding to push through still. I think I just need a mental reset of some sorts.

Update 1.70
How is everyone doing? Hope you are all doing well in these circumstances. My country is still in lock down. I thought I’d have more time to work with the game, but apparently having children out of school means I cannot work on an adult game when they are around…. Since this update was mainly adult scenes, ironically I had less time to work despite more time available.

This setback was compounded by Octane’s latest build. Against wisdom, I decided to update to Octane 2020 stable version… It apparently wasn’t as stable as I and a lot of others hoped it to be. Crashes. Crashes galore. Some has work around but geezus… Nothing is more frustrating than rendering the animation before going to bed only to wake up and it crashed midway. And those same scenes rendered just fine prior to install the new Octane version. On hindsight, I probably should’ve updated after I finished the scenes. Sigh.

Update 1.60
Oh god how to even begin… This update Happenstance was suppose to be released end of Feb but I felt that it wasnt enough. That it would blueball the players, a thing I dont like in some games. So I decided to push through and just create the initial scene. I thought that I would have enough time, about a week, to animate what I needed to. Having upgraded to DS 4.12, the timeline overhaul update really set me back. I don’t use the DS timeline to create animations, I use the animate2.0 plugin. I bought it just to do that. But when baking the animate2.0 blocks to the timeline shit just happened. I thought it was my custom animblocks that was causing it, so I tried the animblocks I bought from the store and weird shit still happened. Even simple animblock like breathing somehow didn’t bake into the timeline well, hip node was changing properties that was never in the animblock. Not go on a rant, workflow has now changed and with the unsurprising lack of documentation of the what the fuck they really did with the new timeline… Yeah. No excuse. But I really did try to make do. Note though, a couple of the animations will be changed next update, it is subpar for me. Working on them atm. I know shouldn’t ship the update with content below my standards, but it a month and a half now… So yeah, links down below.

Update 1.50
Finally here. I didn’t expect to finish it this early to be honest. But things went smoothly with my affairs in IRL so, yeah. This finally closes out Day 6 and in retrospect it may have been overwritten. So many things were going on with the Day 6, but I think it was necessary if the pace will be maintained. Anyway, Happenstance Day 7 is up next and the is the most important so far for me. It was good that I was able to complete Day 6 early as Day 7 will be animation heavy. After you play through this update, you’ll prolly get it what I am saying. Well, that’s it. Link down below.