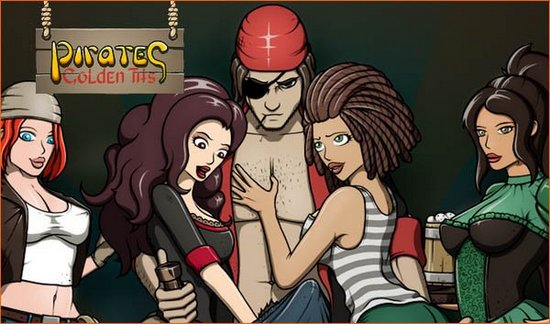 «Pirates: Golden tits» is an explicit pirate simulator. You get to control a young pirate captain, who has just acquired his first ship and who also has lots of adventures, treasures and wet girls awaiting him! Of course, everything you can do in the game has to be achieved, you have to learn to get those shiners! There a lot of ways to do that, actually, such as robbery, trading, fishing or even gambling.

0.17
Added an intermediate quest «To Cook Crab Meat», can be obtained during the quest cycle «Massage Parlor».
Added 18+ scene with Julia.
New recipe added.
Added a new item «Book of Recipes» from Albert.
Added the quest «The Song of the Mermaid», the event is triggered in the captain’s cabin.
Added 18+ scene with Mermaid.
Improved blur effect during a conversation with the characters. (didn`t always work / turn on in the settings)
Removed the FPS indicator in the mini-game «sea battle».
Added item description at the top of the screen in the store when hovering and selecting.
Added blurred background in shops and when trading. (adaptive, can be turned on and off in settings)
Added empty item slots in inventory and shops.
Fixed the conversation menu with Npc, removed some of the dialogues in the «Talk» selection.
Added cross to close inventory.
Fixed the task of the fisherman, for a place of 10 fish you need to bring 4 fish.
Fixed critical bugs with the playback of sounds and music.
Added new sounds and music in mini games and in different locations.
Fixed display of achievements.
Fixed auto-appearance of text.
The font in the information has been changed, now it is the same as in the main menu.
Changed buttons in the Information section.
Added another special thanks to artist Bohohon.
Menu focus in settings moved up.
Added a gallery to the main menu and aligned the text in the menu itself.
Removed the language selection in the Settings menu.
Fixed the magazine page flipping sound.
Added a demo version of the game to Steam that includes all the fixes above.