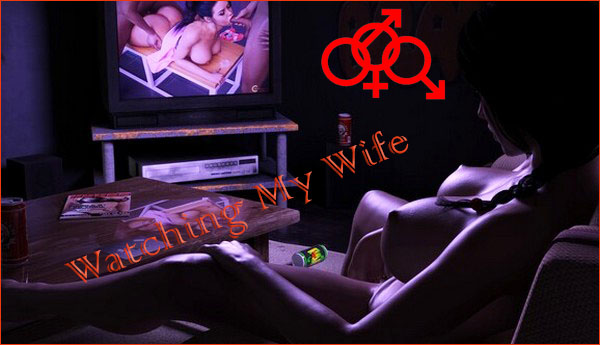 Watching My Wife — the story centres around you, a happily married man with a loving wife. The game follows your journey towards a new romantic awakening in which you broaden your love life to sample wife sharing. How far you go down this rabbit hole, and which direction you follow is up to you. What is certain is that there is no going back for the pair of you as you taste the forbidden fruit of wife sharing, hotwifing and cuckolding.


Changelog
Release 5.2
This now has a scene between wifey and Daniel in the bank, where she invites him to dinner too.
There is a dinner party scene with hubby, wifey, Karl and Daniel.
The sex scene from 5.0 now occurs after the party.
There is a morning scene between hubs and wifey when they discuss the party and the sex they had the previous night.

So we should, after 5.2, have a much clearer route towards converting wifey to sharing — as you’ll see. I reckon you should restart 5.0 and run from there to get your saves reconfigured with the new material.

For those on the Cuck and Cheat routes:
I have fixed a bug which had wifey having a fling with Mark. This happened regardless of wifey’s Respect score. This has now been fixed and will only initiate if your Respect is low enough. Saying that, this doesn’t mean that if she doesn’t partake that she won’t regret not going the distance when she gets home.

Right — for now that’s it — all I have to do now is re-write the Cheat path (change the dialogue mainly), and sort 6.0 out. Living the dream!

Release 5.1
An episode from the PoV of the MFC
170 new renders
Several sex scenes based on the Cuck and Cheat Paths.
Share path will be released separately as Release 5.2
Story takes the MFC perspective as the MMC is at Clearwater Camp. It includes a shopping vivst with the MFC and her best friend, Heather. The trip continues to the home of Mark (Heather’s current fuckbuddy). The story then moves home where MFC and MMC have sex — but for the first time the Cuck route is mentioned explicitly and wifey is encouraged to imagine another man there with them).
Updated Gallery
New Previews

Release 0.5.0
An episode from the PoV of the MMC
333 new renders
Several sex scenes depending on route involving: Wifey, Debbie and/or Avery.
Story wraps up the MMC’s visit to Clearwater Camp with the opportunity to continue the relationship with Debs or have a bash at Avery after her night of excess. Wifey goes out on a shopping trip with Heather (5.1), and returns drunk. MMC sees an opportunity to push his agenda forward through introducing porn to their sex life with positive (if you see it that way) results.
Reconfiguration of Respect parameter for Cuck and Cheat routes to ease the point at which those kinks kick in. To have this apply to the lesbian scene with Trish (4.1), roll back to start of wifey’s visit. If it doesn’t happen and you’re working a low respect game, then you’ll probably need to go farther back and either don’t invite her to Clearwater or lie about losing Trish’s file .
Updated Gallery
New Previews

Watching My Wife Release 0.4.1a and 4.1b
An episode from the PoV of the MFC
350 new renders
New sex scene between MFC and Trish (dependent on route).
Story takes relationship with Daniel further and deeper (dependent on route) and deepens MFC relationship with Trish. Some consequences from player choices will come to bear, and for the first time we may (dependent on choices in earlier releases) have entered the wifey danger zone.
Save Games can now be named.
New Tags
Pretty comprehensive rewrite of Share Route to be more player friendly.
Updated Gallery
New Previews

Watching My Wife Release 0.4.0
An episode from the PoV of the MC (Part 1 of 2 — to be continued in 5.0)
300 new renders
New sex scene between MC and MFC
Story includes: scene with MC, MFC and Daniel, an introduction to Grey’s Club, a school camping trip with a development in the MC’s relationship with Debbie, development in the characters of Avery, James and Stella
Updated Gallery
New Previews

Release 0.3.1
An episode from the PoV of your wife covering the same time span of 0.3.0
150 new renders reflecting her day
New scenes at work and home and out swimming with Heather
Updated Gallery
Artistic and dialogue tweaks and improvements

Watching My Wife Release 0.3.0
An episode from the PoV of the MC
300 new renders
Develops MMC backstory explaining the various paths
More pronounced progress along paths — MMC starts to form in his mind either how to make them happen, or becomes more aware of them.
New college and outside scenes — develops Debbie story line and MFC / Karl story line.
New female character to expand the story
Updated Previews