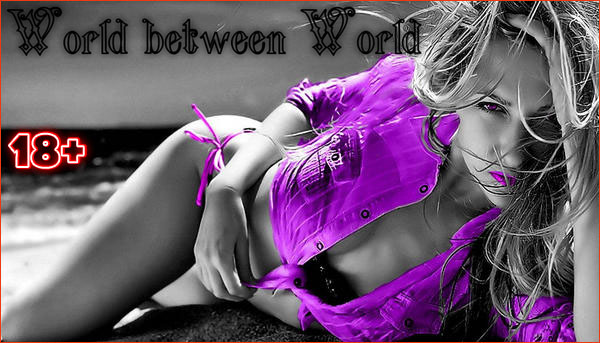 The game World between World is a simulator with a clearly defined main plot in which the progress of the plot is impossible without the involvement of many side effects, after passing a series of mandatory introductory quests, the player can completely ignore the main plot just to develop a relationship with the NPCs. You start the game as a simple nerd who has just entered the university and dreams of starting an active sexual life, parental connections help him get well and get some privileges, but at the end of the first school day he witnesses a completely inexplicable event that will radically change his whole life. And not only him, but the fate of the whole world will also be in his hands. Initial conditions are low. To get to the top of the world, the main character will have to obey the strong and command the weak. The world is cruel and perverted.


Changelog
0.4.0
— Dance training with Christina.
— A hot event with a barmaid in a nightclub.
— In the living room, the possibility of watching TV has been added. Depending on the program, it increases some of the needs of the main character.
— Lisa will arrange a room for rituals.
— At the request of the players, the notebook has been supplemented. Now you can see hints on the development of relationships with characters in it.
— The integration of Christina has been completed. Sex is available with her in four locations, as well as a standard set of interactions. (only if you have completed quests with her)
— Dance teacher Natasha has been added, sex is available with her.
— A new event with Lisa in the Bathroom.

0.3.6
— An event with the release of the spirit of the book.
— An event with the protection of the book of secrets.
— Lisa`s relocation event.
— Bug fixes
— Lisa has been integrated into the protagonist`s house with a basic set of events. Later, the number of events will be increased.
— Added the ability to get the cunnilingus skill with Lisa without humiliation.
— Due to the large number of identical questions, the FAQ section has been written. Please read it before asking questions.
— Game options have been added to the settings, which reduce the complexity of the game and disable some mechanics. We do not recommend changing these settings, as they can spoil the impression of the game, but they can help with testing.

0.3.0
The game World between World has increased in volume by more than 2 times!!!
The code volume has increased by 400,000 symbol.
New events and content are waiting for you.
Several new sandbox modules have been launched.
I had to work 10 hours a day for three weeks to get this update done so quickly.
I hope you enjoy it.
Unfortunately, a professional translator could not do his part of the work, so I had to do the translation myself.
I cannot guarantee that the next update will be released in February due to the heavy load. But I will try to release at least a small update World between World.
— Added to the store: Lubricant, gifts to girls to raise relationships, erotic books and magazines to raise depravity.
— Dates with Vika.
— Added walks with NPCs.
— Added the ability to invite guests.
— Phone: You can call NPCs, invite them to visit and make appointments.
— Event with Vika: foot fetish
— NPCs will read the presented erotica before going to bed if they are alone at home.
— Vika: The event of the defloration.
— Implemented a universal sex module for sandbox actions
— Sex with Vika is available in four locations (at home, in the bedroom, at her house, in her bedroom)
— A nightclub has been launched, so far with minimal functionality.
— Vika: alternative seduction through dating, if the quests with Christina are not completed, or you do not want to use foot fetish.