Battle of the Bulges [v.1.0 Completed] 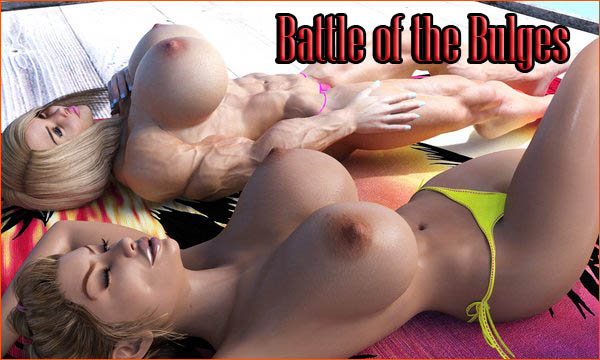 You play as a young, muscle-bound, horse-hung boy who moves to a new home on the tropical island of Veri-Bosti with his mom and sis. There, you are challenged by the local school stud to a duel: whoever fucks the most girls in a week will be crowned the undisputed school stud. Your aim is for each girl to reach «Epic Lust» so that she is primed for the taking, before your AI challenger gets inside her panties. And hence begins the epic «Battle of the Bulges».
Added russian version!


Changelog
Battle of the Bulges v0.8
Takes you to the end of the eighth and final day of the game (Sunday afternoon). it is not v1.0 yet since the CG gallery for day08 hasn’t been added yet. But the game is now complete in itself.

v0.5.1
It includes new achievements (one is still missing from the achievement gallery but it’s «counted» nevertheless), the updated CG gallery to include day05 scenes, as well as some minor changes to the scripts. Replace all existing files in the appropriate folders.

v0.5
— v0.5 takes you to the end of the fifth day of the game (Thursday evening). 300 new renders and 6 animations worth.
— 4 more «in-game» girls can potentially be fucked. Other raunchy situations abound (titjob, voyeur). 2 new individual fuck scenes for teagan and Maria are also available.
— Fixed remained bugs from day 04 but did not add any variables to it, so saves *should* be compatible.
— Some new achievements are available but their animations are not done.