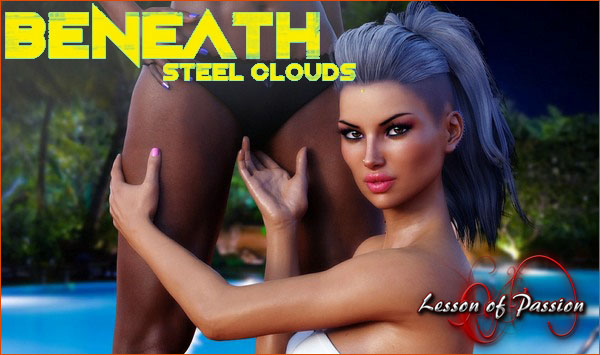 Beneath steel clouds — relationship sim with interesting story and adventure elements by Lesson of Passion. You need to make various choices and perform actions based on a daily schedule in order to get attention of one of 3 lovely ladies. Build your stats, earn money and interact with girls — 3 endings to discover.


Developer Notes
HD update is here!
We’ve just released a new version of our game which includes following new features:
resolution of all images updated to FULL HD
removing the limit of 30 days — now you can play as long as you want
remodeled sex scenes including more interactivity and fun during the sex act
6 new sex animations
6 new images to bonus gallery

Peter is not a hero.
He can be charming (and a little bit obnoxious), he can be gallant (and more than a little lecherous) and he can be quick-witted (or, rather, he needs to be). But he is not a hero. Because Peter is a fool.

A fool who looked for a brighter place, a better future, and found himself living on scraps and stolen goods. A fool who wanted to go beyond what his birthplace offered and found the shadows of a corporate-owned world. A fool who, for some reason or another, still tries to get a better life while clinging to his aspirations.

So, Peter is not a hero. But, for the right woman… he can fake it.

“Beneath Steel Clouds” is a life-sim set in a dystopian future with a cyberpunk aesthetic and themes but without the gritty, grim-dark tone and with a healthy dose of snark added on top. You have thirty days to get a grip on your life, earn (or get) some credits and hopefully get the girl. Get on it, chummer, things ain’t gonna solve themselves! They never do.