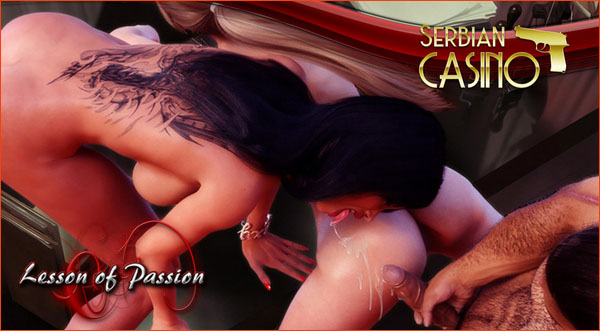 Lesson of Passion released game called Serbian Casino. Once again it’s a dating sim with very interesting theme. The day Christian bent his knee to Faith and asked her to be with him for the rest of his life, she didn’t hesitate to take him up on his offer and become Mr. and Mrs. Christian Louise Grant. Faith felt like a princess as she got the European royal treatment: she aged balsamic vinegar in Italy, filled up on lager in Germany… and chocolate in Belgium. They kept pushing east through Europe until they wound up in a luxurious casino in Serbia.


More Info
Faith basked in her new future even as she began to picture it all: first, they would get a nice apartment in the city as they continued to work; then, a beautiful house in a lovely suburban cul-de-sac, where maybe a kid or two would end up joining them – perhaps even a small dog. Christian planned much the same thing, but, before all that, he had one little surprise for his new blushing bride.

He took Faith to Paris so she could fill their new home with designer dresses and perfumes, and, seeing her elation, decided to prolong their journey.

There, Christian decided to use his paycheck to enter a poker tournament. Faith just watched as time ticked away and, as the early night turned late, she saw her husband’s chip pile wax and wane… but wane much more with each passing hour. After each loss, Christian’s cool demeanor slowly gave way to an infuriated man that awoke an incipient fear in Faith – a fear that grew when he started yelling at everyone. It came as no surprise when armed security took them to the manager.

The man behind the table looked nothing like a casino (Serbian Casino) owner, instead seeming part of the cast of a mafia movie. Intimidated, Christian apologized to him for his behavior and asked for a credit line so he could win his money back. Faith wasn’t even sure what that actually meant, but the manager acceded and Christian was able to continue gambling… only to lose everything once again.

Now the situation is dire: Faith is being held as a hostage by the local mobster while Christian is allowed to get back to the States to gather the money to pay off his debt – and he only has 30 days to manage that.

Play as Faith and discover what it means to be a hostage in a Serbian mansion. Will she survive? Find a new love? Become a sex-slave? And are you brave enough to experience her story Serbian Casino?