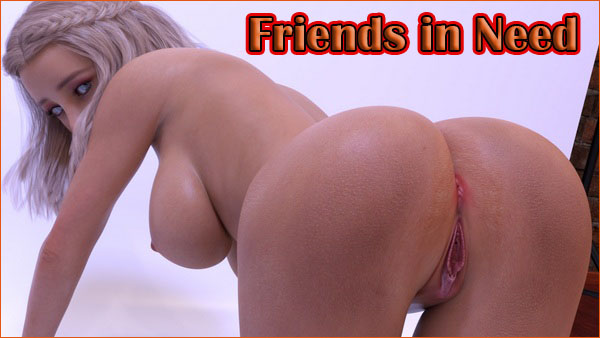 Friends in Need sees you stepping into the role of a man who made a very bad financial decision, which nearly resulted in your ruin. Years later, the reverberations of that decision echo once more through your life, suddenly enriching you beyond your wildest imaginings. When your best friend and long-time crush comes to you for help with her own financial misfortune, you realize that with nearly unlimited resources, you can be a force for good or evil.


Developer notes
Friends in Need is a game focusing largely on moral choices – good, bad, or a little of both! That means that this game contains some taboo themes and situations. However, it’s entirely possible to play a wholly good route, if that’s your prerogative! Most relationships in the game are optional, and you typically have every opportunity to avoid sex scenes with specific characters, as well as certain non-vanilla kinks and fetishes.
Changelog
v0.375
922 new images, total.
Multiple new erotic scenes, with variable endings based on the choices you make.
Lowered opacity of the text box and added a text outline.
Fixed a few images in Chapter Three, resolving issues with clipping, floating, etc.
Added two new images and a few lines of dialogue to one of Ashe’s events in Chapter Two.