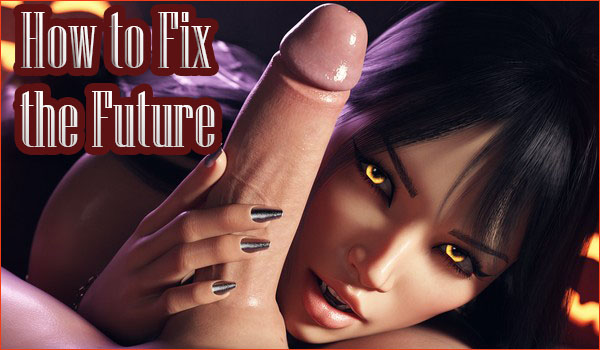 A young man lives an ordinary life. Working as a simple salesman, he escapes reality by playing video games at night. Life hasn’t been fair to him, but everything changes when people around the world start getting mysterious game disks. And when two agents from the future show up, he suddenly becomes involved in the most incredible adventure of his life. Discover the secrets of time. Meet beautiful girls on your journey. And make decisions that will change the flow of time. How To Fix The Future – this is a story oriented sci-fi adventure novel. Where events will take place both in our time and in the near future.

v0.2.3
700 Full-HD renders.
18 Full-HD animation.
8 music tracks.
11 sound effects.
One freeplay event.
Analytics added. You can allow the game to send me information about your choices. It’ll help me to improve the game and concentrate more on content that players are more interested in. You can always disable it in the preferences if you’d like.
Small changes in previous scenes. A few new renders and dialogues.
Fixed typos in both EN and RU versions.

v0.2.1
Added one more option to trans scene and changed MC attitude towards her if you chose to react more neutral. Including MC thoughts during the breakfast and the dialogue with Riley where MC mentions this if you choose to evade her question.
Added a completely new route and outcome for the final scene of v0.2 (31 new renders). Now your previous choices weigh more, and you can defy Octavia and avoid Liu scene if you’re not interested.
Fixed typos in both EN and RU versions.

v0.2 (How To Fix The Future Chapter 1, Part One)
400+ Full HD renders.
10 Full HD animations.
Changed all music and sound effects from Intro.
Added photo gallery.
Added scene replay gallery.
Added statistics and information screen.
Redone animations from Intro. Now they run more smoothly with higher fps.
Completely redone EN translation for Intro.
Fixed typos for RU version.
Added language selection in preferences.
Changed unclear dom/sub variables to depravity and virtue. They define your nature, nothing more.
Rebalanced some choices and their impact on the score.
The choices and points system has been completely reworked. So you will need to start a new game. But you only have to do it once. The new system works this way, that you won’t have to start a new game ever again, even if some changes in points or variables will be made in the future.
Small UI changes.