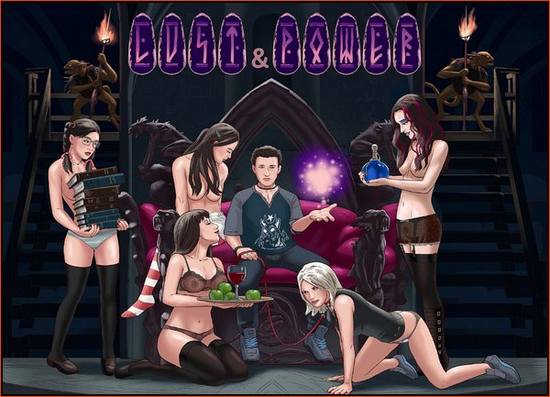 Lust and Power — in this game you play as a young man, whose family inherited a mansion from a distant relative. There you are going to reveal some mysteries and to gain some dark powers. You will have to face demon attacks, to meet some strange persons, to protect your family, and to use their gratefulness to gain control over them and to make them your sex slaves.

v0.44
— Fiddle quests: now you can finish his quest of earning gold and get new inventory item as a reward: the note for his old friend.
— Now you can explore the Forest location and unlock the Cave location by searching the forest.
— Added enemies: plant demons. They have totally new art and new animations of better quality.
— Restored mini-game – the test of Spirit of Entrance that you have to pass to enter the cave (a hint for those who doesn’t know — for this test I used the quotations from one of my favorite writers — Frank Herbert).
— Now you can meet the character – Sharp, and buy special things from him.
— You can ask Sharp put you into a special trance where you may suffer a special vision and increase your energy maximum. Has 16 updated or new vision scenes.
— Spell: stun charm. Being bought from Sharp, allows you to stun the battle opponent for some turns.
— Spell: hypnosis. Being bought from Sharp, allows you to invade the mind of a sleeping person and change their love or submission parameters.
— Mini-game Lust and Power: the battle of minds. Now you can take part in the battle of minds when you invade someone’s mind using hypnosis.
— New mechanics: now you can cook potions in the kitchen. This process got new, more user-friendly interface.
— Inventory items: health potion, energy potion. Now you can use them right from your inventory in any moment to restore energy or health or remove hunger or poison.
— Lisa’s scene: you can ask Lisa help you with your first experiment with potions and cook your first potion together.
— restored 3 Lisa’s hot scenes with extended texts.

v0.43
— the battle against Cherry’s door was added. This door differs from regular doors as it has armor, and you’ll have to use a special spell that can break enemy’s armor (hint: Lisa helps to find this spell)
— added Cherry introduction scene
— restored extended dialogues of Cherry greeting you when you come and making a prediction for you when you leave. Now they differ for different levels of investment.
— added 6 new conversations in the «Talk» option, plus «Compliment» option and «Discipline» option
— added 3 new scenes of Cherry teaching player magic spells and 4 new scenes of Cherry teaching player recipes of potions (unfortunately the skill of potion making doesn’t work yet, will be added in the next update, but you already can buy the recipes)
— restored an option of making investment in Cherry’s buisness (with extended texts)
— restored 7 hot scenes with extended texts (no less than twice more text)
— added 2 new spells for battles: the Fire Ball spell that can deal rather big damage to the enemy even on the low level of this spell, and the Fire Wall spell that creates a wall of fire in front of you, dealing damage to anyone who tries to do a melee attack to you.
— new trading screen and new trading mechanics for Cherry. In the old versions Lust and Power you made investments only to unlock hot scenes with Cherry. Now your investments make the prices of Cherry’s goods more profitable for you. The more investments, the better the prices.
— now you are not returned automatically to the player’s room each time you leave some other room of the house, but go direct to the house map (some players asked me to do so).
— now Emma and Kelly give you quests in the new location — the hallway. It appears only when someone wants to give you a quest.
— we added the new content — random woman that you meet on the streets during the raids. Well, we had something similar in the versions 0.37 and lower, but it’s not some restored old content — it’s totally new. Not a single image and not a single word of text was left from the old version — everything was replaced with new content. It was the most time-taking part of this update.

We created new art for these woman, and it’s much better animated than the old one, we use the increased number of frames. They also have more hair styles and hair colors, more various items of clothes, which are also represented in numerous colors each. This content took us to create 1012 separate image files and make them work together creating various types of women, animated. No matter how long you play, now you just don’t have a chance to meet two women looking the same (though some elements may coincide, but rather seldom as I think).

Now you also can not only save them from demons, but just meet on the streets not being chased by someone, just wandering. You can influence them by trying to dominate while talking, you can share your food with them or use the food to manipulate them. Moreover, now these women have 9 various types of behavior. Some of them are happy to meet you and some are hostile, some of them are confident and some are scared to death. By the words that she greets you, you can try to guess what will be more effective — to be a hero, or a bossy guy, in order to get some sexual favor from her. Some ways won’t work with some women, so now it’s like a mini-game where you have to choose right options to use.

You also can see some random women having oral sex with demons in the houses from time to time. Their images also was replaced with new and better animations.

Old saves in Lust and Power worked properly during the tests.

Livingroom content:
— now Emma and Kelly spend time in the living room watching TV. We restored 3 scenes with them (you join Emma watching TV, you join Kelly watching TV, you join both Emma and Kelly watching TV) and 2 options for each situation (you ask politely the permission to switch the channel, you switch the channel without asking) with extended texts.
— we also restored the option of player visiting empty living room and watching TV alone.
— we added 25 new newscast scenes on Demon TV. They’ll tell you about the events that happen in the area.
— among the newscasts you can also see special interview videotapes with Olyvia that have totally new illustration.
— we restored 3 hot scenes with Samantha on Demon TV

Demonhunters’ content:
— restored a scene where you meet a lonely Demonhunter (or a Demonhunter with carriage) and introduce yourself. Restored all options of exchanging vine or beer for food or demon hearts or information until he tells you about their base location.

Police station content:
— restored a police officer demon type of the enemy — a Biter.
— added 11 new animations for the battle with a Biter demon.
— restored all options of entering the police station (attack the guard or sneak in unseen)
— restored 3 scene of Fiddle giving the player a task and 2 scenes of Fiddle rewarding a player (the 3d task can’t be finished in this version yet.)
— restored the ability of getting special ingredients from the bodies of defeated enemies.

Interface:
— restored the strategy screen where you can see area tasks and plans for defeating Olyvia.

Items:
— a bullet-poof vest. A new equipment for the player that provides better armor and helps to survive in a battle.

Magic spells (visit Lisa in the library and talk about magic spells from time to time to unlock):
— added new spell — Stone Ram. This spell deals damage to the enemy and destroys enemy’s armor. The only possible way to destroy armor in the game.
— added new spell — Stone Wall. Stands between you and the enemy and blocks direct attacks until destroyed.
— restored a spell — Dark Drain. A spell that steals enemy’s energy. A good way to restore your energy and weaken the enemy at the same time.
— restored a spell — Telekinesis. A spell that attracts small distant items to you. For current moment is totally useless in the game, but you can unlock it now for future.

Now you can find/make and wear 2 new armor items: Golf Helmet and Home-Made Vest. Each item gives you 1 armor point when equiped. Helps you to ignore damage in battle.

Lust and Power v0.40
— now you can use upgrade points in the library to make your spells stronger. You can use upgrade points in various ways: either reduce energy cost of the spell, or reduce cooldown time, or increase the duration of the spell, or increase the effect of the spell. So, for example, you can decide if you want to construct cheap and weak spells or expensive and strong. Be wise, your choice can’t be cancelled.
— now you can use the table in your room to navigate through Patreon rewards. It contains all the links that you need to find rewards on my site or activate them (like cheats or outfit spells).
— added 3 new magic spells.
— added 9 new items that you can find during your raids.
— some food now automatically stored in the fridge.
— fixed the bugs that you reported about
— now having meal in the kitchen restores twice more health and energy
— added 3 scenes of talking to ancestor about some important things in the basement.
— added 3 scenes of ancestor teaching you new magic spells.

So, to sum, we added 7 hot scenes, 17 common scenes, 2 new interfaces, 3 new spells, 9 items and some bug fixing, and it took us a month. So the speed of restoring + extending the content of the game is really close to 1 scene per day which is exactly what I expected it to be. Sorry for being silent for the recent month, sometimes I’m just in the circumstances where I can’t keep you informed, but I always try to see to any opportunity to fix it.

v0.37
+3 new scenes with Roxie.
(To start her corruption, first get at least 30 points either of her love or her submission, then she’ll ask you to train her and after this her corruption options will become unlocked. )