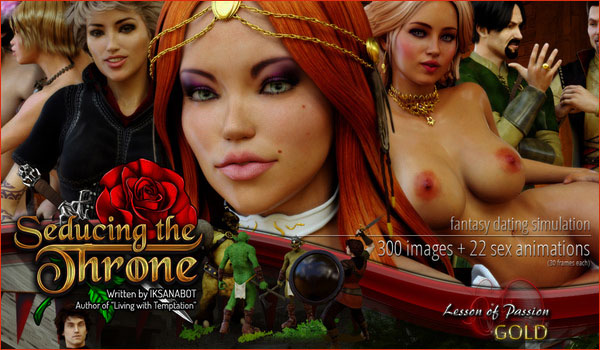 The sex game Seducing the Throne by Lesson of Passion. Anthony Hailing was once a proud member of a strong and political family until the death of their king and his parents sent the world into chaos. But one night, a letter from one of your dear friends, Lord Bigtoes, summons you to the city to tell you that you secretly are the true heir to the throne. Now you have 30 days to try to retake the throne, find love, or become a hero. Expect gangbangs, blowbangs, public sex and every variation in between. It’s just madness!


More Info
There is a new character: a curvy sorceress called Elluna. She is waiting in her pond to be discovered and… to mess with Anthony’s life a little bit. She is not only sexy but also smart, talented, ruthless and knows how to manipulate people. Is Anthony ready to play according to her rules? Or maybe he will try to outsmart her? Expect a brand new plot line with a few twists and turns, some impressive locations, epic quests, and some very sexy rewards.

What’s more, we’ve put a lot of effort into limiting the grind involved in the stat building. Thanks to this epic effort we’ve changed the experience into a more story-focused game Seducing the Throne that is more fun and rewarding.

Become a hero
It’s an RPG game, so you’ll need to build your character’s skills in various areas – fighting, thieving, politics, etc… Impress your gorgeous girlfriends with your progress and help the townsfolk by performing quests (for a price, of course). Upgrade your mansion with new equipment that will help you reach your goals.

Become a king
Your opportunity will come on the night of the summer solstice, 30 days from now. Every ruler is confirmed anew at the summer solstice, receiving the blessing of the Gods from the High Priestess. It is a time for other claims to be heard. You have until then to put yourself in a position to take the throne, or in a position to escape the city when the queen’s men come looking for your head…

Seducing the Throne it’s a time management game in which you will perform various actions every single day. For instance, you could interact with the girls in order to increase your relationships, or train in the Fighters Guild to better wield your sword, or perform epic (or less spectacular) quests to earn money and spend it on gifts, gear, or mansion upgrades.

Every action takes time, so you’ll need to plan your day wisely. Depending on your playing style and your skills, you can end this game in 11 different ways. So, even if you finish it once, you still have a great many reasons (at least two per girl) to try again, improve your technique and reach another ending.