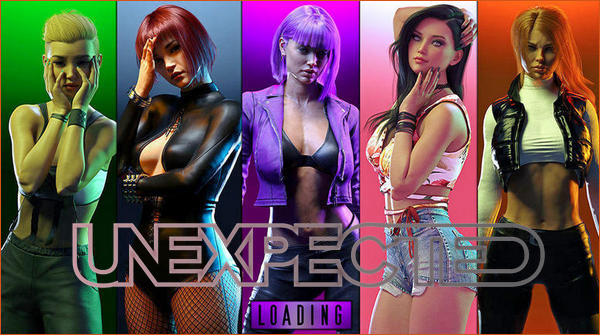 DELTA company has worked for years on a project that will make human life eternal. It promised to prevent people from dying biologically and to automatically repair organs that lost their function, at worst by replacing them with mechanized accents, making human life eternal. As a result, humanity would acquire a new dimension. But in this process, you betrayed the owner of the project, the most powerful and wealthy man in the city, and the company that aims to establish a new order in the world. And this man is your very own father, whom you hate… Why did you betray? Has your betrayal been successful? So why didn’t you allow it when humanity was going to gain a new dimension? You will get answers to all these questions by playing the erotic game Unexpected!

v0.4 (Episode 2 — Part 1)
Added v0.4 that includes:
254 scenes
17 music
29 sounds effects
7 animations
All fonts edited.Transition problems fixed.​
The chip design has been renewed.​
Improvements have been made to the game menu.​
Updated FPS of animations and made them smoother.​
Adjustments were made in the prologue part of the game.​
All versions are fully edited in English again with correctors.​
Effects have been applied to the prologue memories section.​
Selection buttons and quick menu buttons have been changed.​
​
v0.3 (Episode 1 — Part 2)
Added Unexpected v0.3 that includes:
291 scenes
36 music
44 sounds effects
9 animations