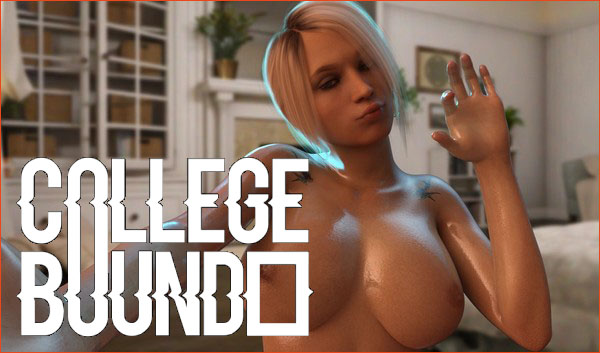 Adults game College Bound by developer FOZ! After two years of working your butt off in college, you finally managed to qualify for an international student exchange program, which also guarantees you a generous scholarship. It was supposed to be a hell of a year-long adventure — you and your girlfriend Summer together in sweet, sweet Paris. Sounds nice, doesn’t it? Well, maybe if the principal didn’t suddenly exclude you from the program completely. That bitch!


More info
What caused her last-minute decision that’s threatening to ruin your relationship and year of adventure? Will you be able to resolve the situation, or provide for yourself without the scholarship? Are you and Summer going to be able to endure the long-distance test or will the plentiful temptations be too hard for you to resist?
Find answers to these questions (and many more as they unravel) on your own, as the choices you make in College Bound will impact the story with each and every update.
The game College Bound is a visual novel in-progress, utilizing classic Ren’py controls and containing high-quality renders as well as fully-animated, non-censored adult scenes.
Changelog
v0.6.03
Get ready for a lot of fun with Shanice in this release! Both in the pub by throwing darts & drinking beers and in the sheets. Oh, she has something prepared for you to make this encounter really unforgettable, check it out for yourself!
Apart from the meeting with the lovely dark-skinned lady there is a very personal «baking» session with your boss Jess. Let’s just say that instead of some cookies, you went for the cake.
Last, but not least, there are some other events important for the story, including an unfortunate fall of Amber, Willow’s doubts about her relationship and Lynda’s discovery.
There are 205 new renders and 12 animation files. Lots of fun for you on this Sunday evening! Or morning…afternoon or the middle of the night, depending on your timezone.

v0.6.01
The first release of College Bound Episode 5 is finally here, and it’s awesome. In CB 0.6.01, you’ll have an opportunity to give Victoria a day at work to remember (and write something on her butt to make the experience even more unforgettable until she washes it off), discover Liu’s secret black hat hobby, and see that Mary indeed has some other things to do in her free time apart from reading a book about Aristotle and Pythafozas.
If you’ve followed the Summer path, there’s a surprise coming for you. Is Summer’s decision expected? Not at all, but that’s nothing new when it comes to the MC’s girlfriend.
If you’ve played Blanca’s route, in this release you’re back from Moanui and there’s a short interaction with her in her apartment.
There are 13 stunning sex animation files and 176 high-quality renders.

Apart from that, there are phone convos with Blanca or Summer, depending on which girl you chose to be your partner, and a short meeting with the one and only pink haired girl — Sina.

We’re slowly and steadily coming to the end of Episode 4, there are a couple of releases left and then I’ll start to build a Steam DLC covering that episode. I’ll have to see if there will be a need for a break of one Patreon release or not, as there is a bit more work required with that Steam release than usual, but I’ll let you know. What comes after Episode 4? The next and final one — Episode 5 of course. But hey, hey, hey… I have something else planned for you, Episode 5 will not be the end of College Bound saga. Stay tuned for more information about that in the near future.

What’s more, you’ll meet the brunette girl next-door Anna and her four-legged friend. Baxter is no longer the only dog in the game! But don’t you worry, this isn’t a game only about dogs, there are some really hot renders featuring Anna too, if canines are not really your type.

There’s a trip with Blanca coming up in the near future, so you’ll also have a chance to buy necessary supplies for the trip to the tropical island. Oh man, such trip is a real fun on its own, but try adding Blanca to the mix…you better fasten your seat belts and stay tuned for future releases.

College Bound 0.5.06 release!
Ladies and gentlemen,
I’m happy to say that this release turned out great, I’m really satisfied with the renders, animations and the story. There are ~120 renders added, and they are very easy on the eyes, just take a look at preview renders to see what I’m talking about. And it’s just a small part of it, because I wanted to make this post on Patreon somewhat SFW.
There is a continuation of the workout with Amber and if you’ve met that girl in-game in the past, you already know where this gym session is headed. Hint: it includes a really nice sex animation with jiggle physics applied just where they need to be.
What’s more, there is a short voyeur scene with Anna for those who like to take a sneak peek. Even though the scene is short (you don’t want to get caught staring, right?), the images included in it will probably make Anna a main character of your wet dreams.
You’ll also have a quick chat with Sina (scene with her upcoming), witness an argument between Jess and Mat, as well as meet College Bound’s one and only 4-legged character (second place is taken by MC who has three legs) — Baxter!
What are you waiting for? Just go ahead, download this Sunday’s release and have lots of (adult) fun!

College Bound 0.5.05 release!
Hello people!
If you’re feeling sleepy, have no worries, as the action contained in this release will certainly wake you up like nothing else. Have fun with Jess in her office (two new animations added!) with a surprise guest, meet with your favorite gym-partner-with-benefits — Amber (buildup to her scene next week) and, watch out, reach one of the possible endings of the game. What kind of ending is it? Definitely not expected, and one MC would probably want to avoid.
That’s all I can tell not to spoil you the fun, so go ahead, download this week’s release and have fun in the College Bound universe!

v0.5.04
this week you’ll see the rest of Lucia’s scene in the tanning room (and check how assertive you are), see your friend you’ve met at gas station (does she look hot in business clothes, too?) and finally do some real work in your Jess’s office gig. There are three short (skippable) minigames and if you’ll get them right, you’ll get a hot reward. Kind of a reward they certainly wouldn’t show on the Office.
There’s Blanca featured, too.

v0.5.03
In today’s release you’ll have an opportunity to meet Miranda in jail thanks to Victoria’s cunning plan (and see a hot BDSM-themed render of the inmate), have a quick chat with Rebecca and Lucia, then assist Lucia in her trip to a tanning salon. Prepare yourself, because there you’ll see more than you wished for!

v0.5.02
This week’s release contains an animated sex scene with Blanca, so if you’re a fan of her, I strongly recommend checking out this release. Apart from that, you’ll meet two characters we haven’t seen in a while, that is Shanice and Liu. Would you suspect Shanice of having such hobby?

v0.5.01
I have a brand new build featuring Summer, Lynda, Lisa and Blanca. You’ll have an opportunity to read some of Mary’s secrets, discover what has happened in Lynda’s past (that she was hiding from you all along) and have a morning surprise by Summer or Blanca (and there is be a buildup to a HJ scene with her so stay tuned).

v0.4.08
We’re getting emotional, mysterious and steamy hot in this update! Have a conversation with Blanca that may change your relationship with Summer forever, go with Tracy into a forbidden area in university’s library and…get naughty! You will also have an opportunity to do something that Miranda will probably not like in the near future, but what exactly is it? You know me, download the game and check it yourself as I won’t spoil you the fun 😉

This update brings over 100 new images, 3 new animations (with different speed variants and some of them enable see-though clothing)

v0.4.07
In this update, MC meets with Blanca…for the last time? Also he gets a tip from an unexpected source, and a long-awaited rendezvous with a busty girl we haven’t seen in-game for quite a while. I think you already know who am I talking about… (based on preview renders as well :p)

There are three new animations (one having two clothing options), about 120 renders and certainly quite a lot of unexpected plot twists that will change some of the characters’ relations maybe for eternity. Is it that serious? Download this update and check it out yourself!

v0.4.03
this weekly release is one of the biggest so far, I made around 145 renders and one animation for it. What you can expect inside, story-wise?
Jess will take you to her summer house a.k.a. cabin, so you can help her out with house chores while her selfish husband is away on a delegation. Will house chores be the only thing you’ll help Jess with? Download the update to find out yourself:)
Also there’s addded a short buildup for the upcoming scene with Aisha & Willow & MC (threesome will be optional) and we didn’t forget about those of you who decided to stay loyal to Summer — there is a short phone conversation with her which will lead to a faithful-players-only scene with her.

v0.4.02
This week, if you’ve played the previous release, you can probably already expect what’s going to happen. A hot, steamy and spontaneous sex scene in the houseparty bathroom!
There’s an animatied scene which turned out really hot, there are skin shine details, also more ‘ambient’ lighting… you’ve got to see it. Apart from that, you’ll meet three other characters — Shanice, Lynda and Tracy.

v0.3.15
his week’s release brings over 110 new renders, minor bug fixes and code improvements, but that’s all under the hood, I bet you’re more interested in the content part.

Safe to say that College Bound 0.3.15 is an all-milf release, because you’ll meet Mia, Lynda as well as Victoria. Quite a lot of unexpected plot twists, alongside with MC helping Lynda to overcome an addiction and celebrating with Victoria her… well celebrating something, not to spoil you the fun.