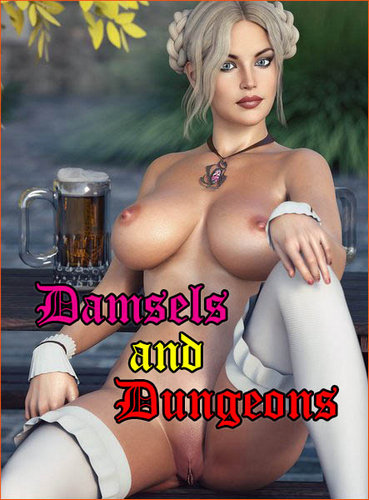 In Damsels and Dungeons you play a man who is managing a group of female adventurers 4 at first, but more as time goes on forming parties, sending them on adventures, getting them magic items, etc. Over time you will gain the affection of your adventurers, learn to cast spells, and engage in acts of lust and perversion.


Changelog
v1.18.2 Final Release
This has been an incredible project for me. I began over two years ago, attempting to design this game in PyGame, only to be unable to get it to compile in a way I could share with others. Then I ported the whole thing over to Ren’py. The first version had four characters and two places to adventure, and some very minimal sex options, but it expanded significantly from there.

This version finally does something I’ve been wanting to do for a while, which is have topless and naked versions of the girls for kneeling and kissing. There is no change in gameplay in this version, just a bunch of renders. As has been the tendency lately in my renders, there’s a lot more variation in poses involved there, as well. The original kissing renders were among the first renders in the game, so it’s good to replace them — I’ve improved my technique a lot over the last 2 years.

If I get bug reports or anything of that sort, I’ll continue to support Damsels and release small updates, but it’s been a while since there was a bug report that didn’t involve someone playing an outdated version, so … fingers crossed. 🙂 This is intended to be the final version of Damsels and Dungeons.

I hope you all will stay for the development of Leather and Steel, but if not, it’s been a lovely ride, and thank you very much for your support for Damsels and Dungeons.

UI Improvements:
There are more tool tips.
“Adventure” and “Mission” are now separated out on the main screen, so you can go directly to sending your girls on an adventure without visiting the mission screen.

Bug Fixes:
Some dialog that caused a bug has been fixed.
Putting a girl in bondage now shows the appropriate picture and text.

Functionality Changes:
Named characters no longer are available for recruiting if they are dead.
There is now a setting screen where you can choose the level of scaling you want to have exist in the game, whether you want the default state of recruits to be fertile, etc.