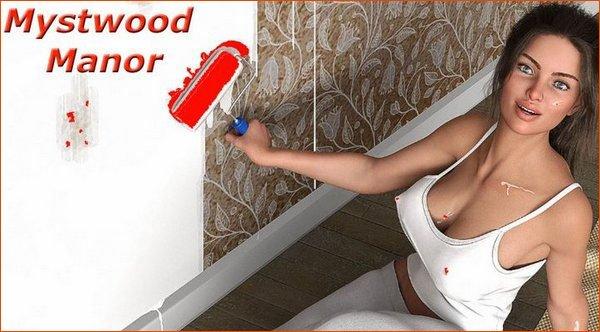 Mystwood Manor – new game from the creator “Man Of The House”. In ancient woods the realms collide and thus the veil wears thin. Spirits dwell and dreams shall haunt all those who stay within. So take great heed and turn away when myst devours your sight. Lest you get caught and forevermore lie trapped in endless night.​..


Changelog
v1.1.0 Full
Hey guys!
Here’s the final content update for Mystwood Manor, with some Halloween bonus content and one
new unlockable guest.
Next month, I will begin development on my new game. So you can expect some polls and previews
in the coming weeks! I’m really looking forward to starting a new project and hope this will be my
best game yet! Thank you all for your support and happy Halloween!
Note: Existing saves can be copied over by moving the profiles folder from the previous version to
this one.
All the best,
Faerin

v1.0.1 full
Hey guys! This is it, after 3 years, the final release of Mystwood Manor is finally here! For this version, I focused on fixing any remaining bugs, as well as some last gameplay/UI improvements and adding short repeatable scenes for each staff member. Thank you all for your great support over the past 3 years, and I hope you will all join me for my next game! Development should start in November, as there will be one more update, for Mystwood Manor, with a “bonus guest” and Halloween staff outfits next month. Note: Existing saves can be copied over by moving the profiles folder from the previous version to this one. All the best, Faerin

Story
Added short, repeatable scenes at night for all staff members (these will unlock as you improve your relationship with them).
Added a new “hidden” event, that gives you the new “attuned” trait.

Full version only
Added a popup showing some of the cheat options, after completing the tutorial.
Further improved the auto-planner function.

v0.9.4b Hotfix
This is a hotfix for the animations slider bug

Bugfixes
The champagne button will now be locked if there are no guests with strikes.
Fixed a visual glitch in horizontal scrolling images.
Fixed a bug causing a soft lock on the staff screen after selecting a trait.
Fixed the tutorial for the guest screen.
Fixed a bug causing the cheats not be locked during the tutorial.
Slightly changed Miguel’s final event for Story mode, so he doesn’t give you the business card.
Fixed the white screens in Miguel’s final event during story mode.
Removed the bonus tier reward and claim button in story mode.

v0.9.3.5
For this update I’ve added the remaining guest scenes for Denise, Karen, Martin. I also added a bonus scene for Isabella.
I hope you guys will enjoy it!
Note: Existing saves can be copied over by moving the profiles folder from the previous version to this one.
All the best, Faerin

Gameplay/UI
Added a new upgrade to the office, that unlocks a new activity.
Added 4 new event traits.
Renamed the “flirty” trait to “charming”.
Julia can no longer get the “underpaid” trait.
Fixed a bug with the trait points not being set correctly.
Note: Each staff member should get 1 trait per level up (for a total of 4), not counting any
fixed or negative traits.
Change the room upgrade screen UI.
Removed hard and nightmare difficulties.
Removed the gallery tab for guests.
Auto skipping the results screen now stops when a new image is shown.

Gameplay/UI
Added a new item.
Added a new trait.
Added language support for card and items.
Added language support for skills and traits.
Changed the trait system, now all girls get a trait per level, regardless of special “fixed” traits.
Added different colors and symbols to differentiate the traits, and updates the tooltips.
Closing the traits no longer resets the available options.
Added a reminder dialog to pay off your debt, once you’ve made enough money.
Added Traditional Chinese translation.

Full version
Added an option to the cheat console that prevents staff energy from going down.

Gameplay/UI:
Implemented a bonus reward tier (all staff members will be naked).
Note: You will need to unlock this first, by completing a new event, and obtaining a special item.
Note: you can turn this on/off by (un)equipping the item.
Added images for the bonus tier for all girls with upkeep jobs.
Added a custom game icon for MwM.
Added staff descriptions to the profile page.
The statistics buttons now unlocks after the intro (like the cheat button).
Story mode is now available in the basic version as well.
Added translation for day and time in UI.
Changed the locations where some of the items can be found (this will not affect existing saves.)
Replaced the Unity splash screen with a new logo animation.

v0.9
For this update I’ve added new scenes for Riley, Annika and Denise Farrow. I also expanded the main
storyline, and polished overall gameplay.
I hope you guys will enjoy it!
Note: Existing saves can be copied over by moving the profiles folder from the previous version to
this one.
All the best, Faerin

Gameplay/UI
Added the first 4 positive upkeep events (note: these have a small chance to trigger when
you assign a staff member to a hotel attribute that is already at 100%).
Added images for the actions on the activity screens.
Updated the map.
You can now visit Isabella both in the evening and at night (instead of one of the two).
Isabella will now grant you multiple readings per visit, if you have enough destiny points.
Reduced the time dial animation length significantly.

v0.8.2b
For this update, I’ve added new scenes for Hana, and Nora Walsh reworked all the tarot cards and
fixed several bugs. Unfortunately, the tarot cards took way longer than I anticipated, so this update
will not have as many new scenes as usual.
To make up for this, next month will be a big content update.
Note: Existing saves can be copied over by moving the profiles folder from the previous version to
this one.
All the best,
Faerin
Story
Added a new tier 5 event for Hana.
Added a new even for Nora Walsh.
Gameplay/UI
Guests that check-in will now always choose the activity that is required to complete their
next event, until you complete it.
Note: you still need to have the required renovation and guest level.
Tarot cards
I have finished and updated all of the tarot cards.
Note: Most of your cards will be converted properly, but cards that are no longer in the game
will be lost.
Added all remaining tarot card images.
Fixed the gender symbol on all tarot cards.
Rebalanced and updated most tarot cards.
Added several new cards.
Added card title translations.
Bugfixes

Gameplay/UI
Implemented guest traits (and added the first one to Diego’s 2nd event as a possible outcome).
The staff screen will now switch to Julia’s profile during the staff tutorial.
Note: This will show up once more for existing saves, as I needed to add new flag for this.
Animations can no longer be enabled/disabled during dialogs (to prevent control issues).

Full Version
Implemented story mode (you will have to start a new game to play this).
Note: This removes ALL of the gameplay/management elements.
I don’t recommend playing the game like this, unless you ONLY want to see the story and character events.

Gameplay/UI
Improved the auto plan function. It should be a lot more efficient now. Note: There are still some variables (like level and energy) that are not taken into account, so manual planning will always be the optimal choice.
Added a statistics screen: This can be accessed through the menu and will show detailed gameplay information (note: this will start counting from now on, so it won’t be accurate for previous savegames).
Added a new item that unlocks after renovating the office (for now it can be found in the attic, like all the other items).
Removed the skip button during check-in.
The “diplomatic” trait now grants 2 guest re-rolls.
Added an office upgrade that adds 2 guest re-rolls.
Added a tooltip to wages screen to view staff member details.
Added a setting to disable automatic planning of a staff member to the same slot as the previous shift.
Note: You will have to enable this for previous saves.
Items are now sorted by staff and player items (same as with cards).
Changed “DO not skip VIP interactions” text to make it more inline with other settings. Note: You will have to change this setting once for previous saves.

Gameplay/UI:
Updated the map: the woods now has several sublocations.
Once a location has been discovered, it will remain, and you will be able to visit them directly. (The map background will be added at a later stage.)
Guests can now have duplicate activities.
Adjusted Annika’s starting skill levels.
Adjusted Laura’s starting skill levels.
Adjusted Catalina’s starting skill level.
Updated the hints how to unlock the yoga studio and club.
Now only the next hint will be displayed (instead of all hints).
After replaying an event, you will now return to the selected character’s profile and the previous scroll position.
The interface is now locked after selecting a staff member/guest to visit (so you can’t accidentally click another one after.)

Mystwood Manor v0.5.1 full
Hey guys,
I have finished Hana’s tier 4 events and added the first tier 5 for Julia. Honestly, I was hoping to do a bit more, but the scenes took more time than I anticipated and there were some very persistent bugs/issues that needed to be fixed. But all in all, I feel like the game is moving in the right direction.
I’ll put a poll this weekend for the next month, as there is plenty of new content to add now. I hope you will enjoy the update and if you have any feedback, please let me know! Note: Existing saves can be copied over by moving the profiles folder from the previous version to this one. All the best, Faerin
Mystwood Manor Story:
Added all tier 4 events for Hana.
Added all tier 5 outfits for Julia.
Added the first tier 5 event for Julia.
Added all tier 5 outfits for Amber.
Implemented the office, adding 2 new jobs for the MC that will increase your hotel progression (and 2 upgrades that increase the effectiveness of the corresponding jobs). (I’ll probably add more jobs later on in the development).
Mystwood Manor Gameplay/UI:
Added a dialog for Julia to remind players of the guest level, as this seems to be missed a lot.
Improved the overall memory management, which should prevent leaks and hopefully reduce crashes on some older systems.
Bugfixes:
Uppgraded to a new version of the video player, this should fix the issue playing animations on Windows 8.1
The scrollbar on the progression tab now resets when switching to another girl/guest.
Fixed a bug with the adventurer card, causing equiped items to get lost when switching the card to a different girl.
Fixed a bug causing random lockups when skipping through dialogs (please let me know if you still encounter this).