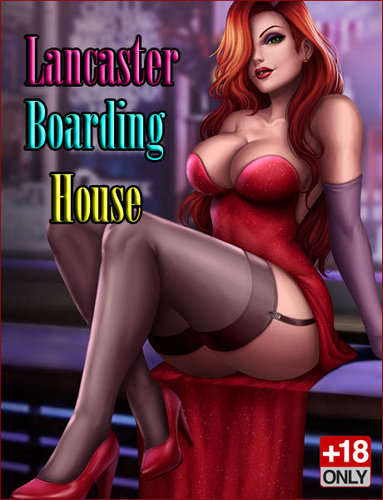 
Changelog
Lancaster Boarding House Final
The final version brings four different endings, one with Abigail, one with Anna, one with Lisa and one where you fail (or don’t want) to end up with any of the girls. Over 250 new images and three video animations! There’s also a new girl for the ritual squeezed in there for you to «explore» if you wish. As usual for the endings you will need to meet certain conditions like having enough «nice», «manly» or «jerk» stats. All the requirements will be explained in the walkthrough.

v1.9
This update brings two endings for Rose (along with a Lisa scene), as you know, one with Rose and one with Chloe and Rose both. In order to unlock these scenes there are some things that you must have done in the previous versions of the game (Will be explained in the walkthrough so check that). If you find yourself unable to access Rose’s ending or Rose’s and Chloe’s ending then you missed something along the way, this can become clear with the walkthrough.
There are 160+ images in this update along with 2 video animations, one for each ending. Also I’m trying out something new, you can see it in Rose’s ending, the bathroom scene (steam animation and shower).

v1.8
In this update Lancaster Boarding House we get our first ending! As you all know the first ending belongs to Chloe, she was there from the beginning and was present in most of the updates, she had the most content and in order to access other endings she had to be the first one.
Chloe is the only girl in the game that doesn’t require any stats or decisions to unlock her ending. You could have been the jerk of jerks and still get her ending, however, there is another extra scene that can only be accessed by «true gentleman». Basically if you didn’t fool around with Rose, Lisa, Anna, Abigail you will get to see that scene. Eve and the teacher, not being main characters have no impact, meaning you can fool around with them. They were always there to add to the adult part of the game and not the story.
This update was the largest of them all, adding 200 images and 2 video animations, enough content for the ending and before the ending. Rough scenes, romantic scenes, dirty… Has it all and more!

v1.7
This update is focused on Abigail and Lisa and partly Eve. There are two very important choices that help you decide if you want access to Lisa’s ending or Abigail’s, however both of these choices are available to you in this version so you can decide later who you want to end with.

v1.6
— Story progression (Including Rose’s)
— 150 new images
— 1 video animated sex scene
— A threesome (Two girls and the main character)
— An Anna scene, Chloe scene, Rose scene, Eve scene.
— And more!
I think most of you know this but for those that don’t :
Choices are important in Lancaster Boarding House, depending on your past choices you might or might not be able to access the Anna scene for example. Same goes for Rose’s scene and many others in the previous versions. Since the game features a lot of girls, each with their own story, it’s hard to keep the amount of content on an equal level for all the girls. Some girls might have more scenes in version 1.6 while others had more in 1.5 and so on. So far I think I’m doing a pretty good job keeping these things in check and making sure every girl get’s her time in the spotlight.

v1.4
— Over 150 new images
— One video animated scene
— The «Ritual» is explained… Find out what it’s all about!
— A glimpse into a new character!
— And more!
Oh you got this far? Kick that heart button and… Here’s a secret, the dialogue choices are going to get a revamp soon, maybe sooner than you think. More dialogue options will be introduced in the game to make it more immersive (The whole game, starting from the first day!). Let the good times roll!

v1.2
This is by far the most kinky and «sexually charged» version so far, might have gone a bit overboard with it to be honest but hey, the more the better, right? There’s also a small «golden» fetish inside for the jerk route… Pretty solid version, important choices, most images so far in a single update and 2 video animations!
I have a lot of great ideas still to come, really wished I could put them all in this version but sadly there was no more time. At the end you will be faced with 3 choices, to go on with Chloe, «Help Eve», or help Abigail. The Eve part is already done and it’s great, the other two choices will be completed in the coming version (Just so you know where a good save point is).
Also a bug was spotted, pretty harmless but can break the story a little bit in some cases. If you have a saved game before the Ritual scene, before the girl in the hallway asks you to help her I recommend you use that one and skip over the parts that you already seen(if you didn’t participate in the ritual). Shouldn’t take you more than a couple of minutes to get right back to it. What happens is that if you didn’t participate in the ritual the character thinks he did and it might seem a bit off, that was a coding error.

v1.1
The story Lancaster Boarding House goes on after the lake party and brings new events and curious scenarios, as well as exciting new adventures! As said in a previous post Anna has the spotlight but Chloe, Rose and some new faces make themselves known! I believe this update is even better than the demo version but I’ll let you be the judge of that… It seems there’s more to the story that previously thought… No more spoilers!
Also, some scenes will be accessed if you have done certain things (This will be made clear in the walkthrough in a few days.)
Finally found a better video converter for the animations, so expect them to only get better from now on! I really hope there is enough time in the next update to try out something new with the video animations.