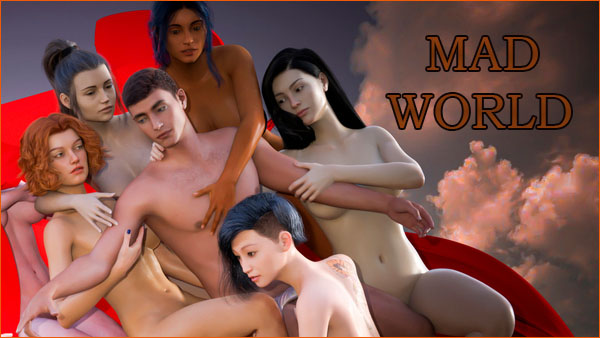 Mad World is a non-linear tale of humanity, love, survival, and insanity often indistinguishable from each other. Meet new people, get to know their hopes and dreams, and acquire new fears as you get entangled in their complicated lives and form deep emotional connections. By chance, in a bar at night, you meet a strange man who claims to be a god. The power he gives you opens the door to a world riddled with violence and injustice – but also hope and goodwill.


Changelog
Release 4.0.1
Release of Chapter 4 with 1764 new renders, 13 new animations, and three hours of new playable content.
First batch of massive reworks on some scenes with approximately 200 new renders and dialogue.
First batch of huge polishing on dialogue, improving readability.
Upon skipping the prompt to choose your character’s name, it will now default itself to “Jason Shrike”.
Pressing the skip button in-game will now continuously skip unseen dialogue until it reaches a choice prompt.
Converted all images from PNG and JPG to Webm to optimize file size from 12GB to 4GB.
New splash art.
New main menu art.
Changes to the in-game user interface. It is now accessible while hovering over the top-right corner of the screen.
Journal System added.
The name tag color of many characters has been color swapped, and some of them now have their own outline color.
Elena’s library scene in Chapter 2 has become conditional and will no longer trigger only by prompt. It will require a certain choice to not be picked previously.
Swapped Rogue’s 3d model.
New sound effects throughout the game.
New music.
Lots of other undocumented changes.

Release 3.2.0.0
Added a new chapter to the game.
Fixed many script mistakes throughout all chapters.
Added new music.

Release 2.0
Added a new chapter to the game Mad World.

Release 1.0
Added a new chapter to the game.
Made a small tweak to the main menu cover to include the name of the song being played.
Tweaked the dialogue font due to general feedback.
Removed all the bears (hopefully).