Where It All Began [Chapter 2 Full] 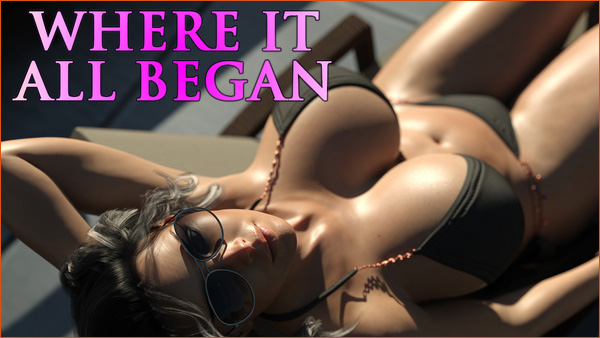 v0.6 Beta
— Added Around 1000 still renders.
— 25+ animations (~ 1400 renders)
— 2 Cinematics (~ 3150 renders)
— 31.000+ words added.
— Custom GUI added. (Work in Progress. It will be overhauled with the rework.)
— Small intro added (Will also be overhauled with the rework.)
— 3 Custom galleries added with custom galleries for each girl.
— 30+ animated transitions added.
— Ability to name ‘Save-Files’ added.
— You can now choose the girl you want to spent the night on the camping trip.
— Complete rework of Leia, Abigail, Helen, Scarlet, Katarina, Ronda, Katie, Melinda, etc.
— 1 Advanced Fetish route added to Katie’s route
— New main-menu Where It All Began background music (Vesky — Regret.)
— Default name for the MC added. (William)
The walkthrough is reluctant because of the upcoming rework of the first 4-5 versions. Use the old one.
With the rework, Chapter 6 will get a WT.

It’s been over a week since the game got out. I’ve collected and fixed all the more or less game breaking bugs.

— All variables should work now.
— Missing images removed or replaced.
— A brand new Options.rpy. (If your game crashes now, it’s not my fault, it’s your potato.)
— A walkthrough mistake got removed.
— Added a new choice to Katies route. (You weren’t able to pleasure her if you declined Leias date.)

This should fix everything.

And please load a save from before the major prison scene in 0.4. Just to make sure it works.

In Where It All Began 0.6 saves from the end of 0.5 should work. I learned one or two things in the past days.
If there are anymore bugs, please report them to me.

This update Where It All Began features more H scenes than all other updates together.

(I had to cut one Animation away due to a little error. It was the most complex animation with 180 frames and various stages. It had a small error that I didn’t notice at first. This animation took 6 days to render. I will re-do it later in the game and at it with the mission Melinda animation from 0.4)

Many Quality of life changes in the previous versions. I Deleted a lot of unnecessary clicks & fixed some gramma errors.

There are 5 routes through this update.

(Katie, Zoey & Darkstar route can be chosen.)
(Katie & Zoey route only under specific cirumstences. Otherwise Route 1 — 4 are randomized and can’t be chosen manually.) (Look into the walkthrough for more info.)

Mirus story also begins in this update.
I highly recommend looking into the walkthough.
This was by far the most challenging update. Not because of all the routes, no. Because of the time it took to render everything. Sometimes I got so fatigue that I asked myself if this is worth it. Then on top of that I had to renew my health care due to the fact that I now count as a self-employed person. I now have to pay 280$ a month for it, just because I make a little more than 450€. As you can see, at the moment I’m working for almost nothing. But I’m not a quitter and the ability to live out my creativity keeps me going.
I hope you’ll like the update.

You may notice some differences in Render quality. That’s because I learned a lot in the last 3 weeks and used my new knowledge.
0.6 and beyond will have a new standard of quality.