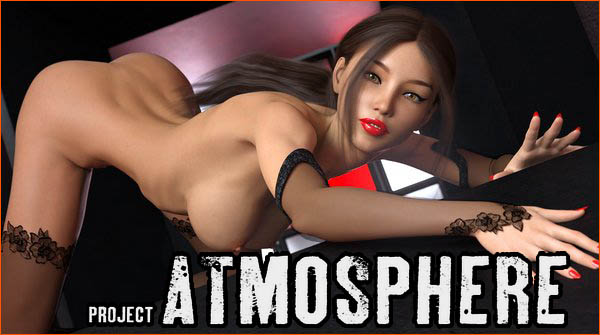 The action of the game Project ATMOSPHERE takes place in the near future. The year 2025. The main character Dan — a young man who just recently graduated from the university majoring in «Organic Robotics and Artificial Intelligence». It would seem a great profession, but our hero can not decide what to do next. I’m sure you can help him make up his mind! He is surrounded by different people, among them there are close friends, and some even closer than he thought. Sudden incident will make our hero wake up from «hibernation» and become a real man, who is ready to do anything to achieve his goal.


Changelog
v0.4-P1
1394 new static renders
61 new rewards renders
111 new animations
27 new BIOS pics
15 new licence music tracks
New Events:
Story events with Jessy and Yui
Event at home with Phoebe in her room
Event at home with Phoebe in MC room and kitchen
Event at Bongalo house with Susan (romantic way)
Event at Beach resort with Susan (kinky way)
Small event with Karen
New Features:
Choice timer – we add a new mechanic that add’s more action to dialogs (can be switch off in Preference menu).
Smart LEWD mechanic – we add a new mechanic for LEWD scenes that add’s choices and points which affect on scene (can be switch off in Preference menu).
Dialog box opacity – we add a dialog box and make it adjustable in Preference menu (can be switch off in Preference menu).
Shaded preview for all rewards in Gallery that the player hasn’t unlocked.
Gallery now shows all reward renders available in the game.
Shaded preview for all avatars in BIOS that the player hasn’t unlocked.
BIOS now shows all avatars available in the game.
New neutral and quiet sound for notifications.
The game has been updated to the latest version Renpy 8.0.2

As well:
Event that introduces you to Stan and Lily.
The chain of events in the mirror (Yui, Alice, and other new characters).
Epic Event (MC, Vanessa, Adam, Eve).
Event at Viola’s store.
Monica event.
Phoebe event.
Cheat mode
Some changes and improvements to the interface

As well:
Improved translation of Game Day 15. Thanks to SkylarMM and Luccy!
Improved interface.
Episode 1 got new english translate.
Improved interface
All laptop’s apps are working now.
Added analytic tool for better feedback (optional)
Added some new mechanics in the game.
And other little things.

To keep from having problems loading a saved games, do not unpack the archive into the folder with the old version of the game.
Soon we plan to release patch 0.2.1 with English translation corrections 1 and 2 episodes

Project ATMOSPHERE v0.1.8
List of changes:
More than 380+ new renderers. 3000+ lines of code 10 new rewards renders
Some new characters in the main storyline.
Next day in ATMOSPHERE.
A beautiful romantic event with Yui.
Meeting the new character of Mary.
Next event with Monica.
Continuation of Maya’s story.
And the highlight of this update is the Susan event that many of you are waiting for.

As well:
Fixed English translation of the whole first episode. Thank you Dirtybird very much!
Fixed small save game compatibility.
Added highlighting of the last save game.
Added Phoebe now lives in her room.
Added some new mechanics in the game.
And other little things.

ADDED
Now the game has a loader, which will automatically download updates and patches. It is no longer necessary to download the game client every time.
A completely redesigned event with Jesse in the shower. Added 30+ new renders.
Added an experimental function in a dialog. Now you can rewind the «classic dilogue view» forward and backward with the mouse wheel.
Added an option to change the player name. This is available in the settings menu. You asked, I did it for you!
FIXES
Morning dialogues with Jesse have been optimized, now it’ s 3 instead of 8.
Fixed an error in the dialogue with Amy when no player’s messages were visible.
Fixed an error when the sound of the splash screen was not adjustable in the game settings.
Fixed an error in a dialog with Betty when the dialog with her was not started.
Fixed multiple translation errors.
Optimized all locations, scene locations now load faster.
Fixed end of conversation error, which forced to restart the game to continue.
And other minor fixes.