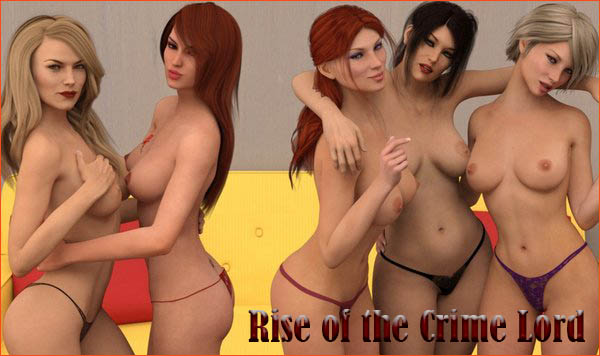 Rise of the Crime Lord — the protagonist of the game is Rick. He lives a simple, whitecollar life, but receives no pleasure from it. His family is broken, his marriage is in shambles, and his boss constantly abuses him at work. Then, one day, thanks to circumstances, he gets caught up in the addictive world of sin and power. Will you take back control of your life? Or will you sit by idly as everything you’ve worked is torn apart in front of your eyes? Find out if you have what it takes to be a Crime Lord.


Changelog
v0.10 Extended
— A half a chapter, but don’t let that put you off, it’s the same length as the previous chapters.
— 987 new pictures.
— 11 new animations
— Minor improvements and bugfix to previous chapters.

v0.9.1 Extended
— Two new optional scenarios with Cora and Daniel. Which one you can reach depends on the relationship between Cora and Daniel.
— 127 new pictures.
— 8 new animations
— Minor improvements and bugfix to previous chapters.

v0.9
A whole new chapter with Rick and Cora
1675 new image the main storyline + 12 new image in the new Untold Stories
18 new animation (+ 2 new animations in the prologue)
Extra scenes with Rachel, Terence and Shepard.*
Minor visual fixes in previous chapters
Minor fixes in translation
Bugfix
-It is important to note that the extra scenes in the Extended Version are no longer called Untold Stories. Simply because not just one character is given extra scenes, and the length and placement of those extra scenes varies widely. And will continue to do so in the future. However, the extra scenes will still focus on the side characters, but they will not have a title, and there will be many more of them in the chapters.

0.8
Over 750 images.
13 animations
Scenes with Cora, Ash, Kendra, Mirri, Kelly, Jake, Terence, Rachel, Sam and Judit.
Meet a new character.
Depending on your previous decision, one or two characters will die.

0.5
Revised prologue
A whole new chapter Rise of the Crime Lord
One Untold Story (Consigliere and Contabile patreon)
973 new image
4 animation
The chapters are now in chronological order.
Tons of translation errors corrected in the prologue and in one third of Chapter 3. Thanks LouWill for that!

0.4
A whole new chapter.
766 new images in the the main storyline
One Untold Stories: Face of the Enemy, consist of a total of 16 pictures.
Correction in translation in Prologue and Chapter 1

v0.3.1
Important! There is no new chapter in this version, I just rework the first chapter and the game got a new relationship system.
236 new image in the first chapter Rise of the Crime Lord.
I’ve rework some old image, mostly the backgrounds, but there are some major changes.
From now on, a new scoring-based relationship system is running in the background. You can’t see this, but it will be of great help to me in the future.
New storyline with Cora. You can decide that Cora remains faithful to Rick or not.
Kelly’s storyline has been reworked. If Cora doesn’t sleep with her coworker, then you can learn more about Kelly. This can come in handy in the future.
In the second chapter, you can be avoid the sexual contact with Judit, except for one kiss.
I’ve fixed a lot of translation errors in the first half of the game.
Teaser from the third chapter.