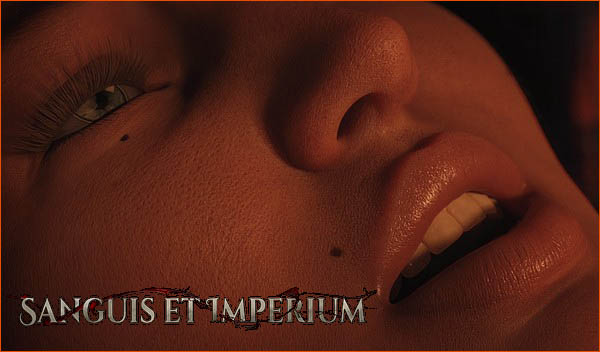 «Sanguis et Imperium» is a Visual Novel that takes you back in time through the eyes of Alaire Lacroix, from his youth to the present. You will know his pain, his joy, his love, his hopes, his conversion, his power and the different girls who left a piece of them in him. You will have the possibility to guide his path, and remember that your actions and your attitude towards life will change the outcomes and the relationships you will have with each character you meet in the game. Set in medieval France, Italy, Morocco and Spain, the historical winks will enrich the player’s experience.


Changelog
v0.2 Alpha
I am releasing the alpha version (it is 98% of the beta) because it is what I could complete in an integrated way (although I already perceived a rendering error that I will correct after the release).
I will pause the patreon pledges for a month, because I couldn’t deliver what I promised.
During these days that I disappeared I had a bad time, although it’s not an excuse because we are all working and living in a fucked up time; I didn’t count that I was going to get covid. While it didn’t put me at a point where I needed urgent medical attention, it did keep me on medication, quarantine and oxygen. I feel better now, although a bit tired, but I still want to express what happened and that I will continue to do this project, as it is one of the few things I have left.
The alpha that you will play, has a long introduction that will practically make you think that it is more like a kinetic novel, instead of the game that you are used to. After that introduction of characters and times, is when we get back to the same game mechanics (and the full version of 0.2 continues with those mechanics… there are no more «kinetic novel parts» in the rest of 0.2).
With nothing more to say, I thank those of you who have stayed behind to support me in my silence and absence. Please take care of yourselves.

v0.1.2
Fixed forced unskipping.
Changed a lot of hidden values. Playing from the start is recommended.
All images from Act I and Act II redone in Photoshop, they’re brighter as they supposed to be. It was way too dark due a bug in my Photoshop and my screen.

OTHER
Fullscreen is now the default window size.