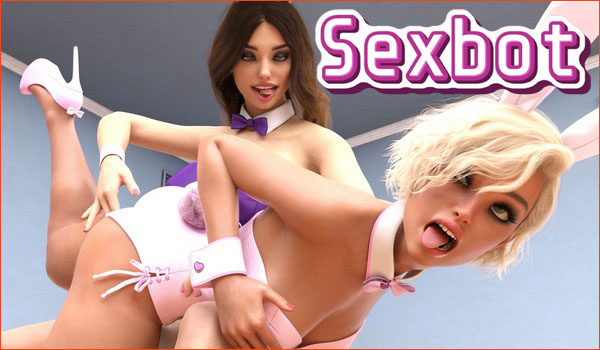 Sexbot — can’t find a date for the prom? Then order Alexa today! Our newest version of Alexa is a super sexy robot ready to follow your every command! Developer is not responsible for Alexa AI sentience or robo-hostility, follow user manual and set up to insure obedience in your sexy robot companion or don’t and see what happens. Play through this science fiction game as a dateless nerd looking for love in all the wrong places. Program your new Sexbot to follow your commands or think on her own. Just be careful Emily doesn’t find out what you’re up to! With Alexa’s high-tech 3D bio printer, anything is possible! From new outfits to toys to well anything!


Changelog
Sexbot 0.9.1b
The latest update to the sexy, sci-fi epic Sexbot! I think this update is great, and I hope you will too. The core cast got lots of attention with new scenes and even new events. Check out the changelog below:

Ashley progress has been reset. Choose the «Get confident» option with Bailey at school to restart her story. There is a slight rewrite for Ashley’s previous events

Changes from 0.9.0a to 0.9.1b
— New feature — the galleries remember where you left off! Thanks to some code given to Sexbot by ZLZK, replaying your favourite scenes is easier than ever!
— Alexa Zeta values have been reset!!! Redundant variables have been removed such as «Alexa Calibration» and Alexa will function on «Alexa Dominant Zeta» and «Alexa Submissive Zeta». This will not affect unlocked scenes in the gallery, but to get the scenes
— Zeta notifications have been fixed to only display when the relevant stat is increased (Should not show when repeating a scene)
— Prom zetas and stat changes and notifications have been changed to when your date arrives (all characters)
— Day and Time indicator has been added! Should be visible only during transition scenes, and choices (not during scenes featured in the gallery)
— Beerpong event has been moved to day 4 evening and all night visit scenes have been moved to day 5 evening. This frees a spot for a «date» slot, and more fittingly finishes the week with a potential nighttime visit.
— Gallery hints have all been edited to uniformly refer to morning/daytime/evening
— .rpy file names have been changed to corrospond with morning/daytime/evening
— spelling and other minor errors cleaned up

Sexbot 0.5 Beta
I am excited to present this new update to Sexbot! The biggest QOL improvement is the new gallery feature. This gallery is available in game (not via menu) and unlocks with play. This will track your progress and clearly indicate when you have seen all of the games content.
I have done a lot of backend work to allow for the gallery and future expansion (I know I said this last time, but hopefully this is the last time you need to restart). There are also currently 5 hidden achievements in the game (they are NOT hidden clicks, but game actions, with hints available in the gallery)

We have a new character introduced as well, a bunch of new scenes, and reincorporated scenes from 0.3.

0.3
Requires a new save
Images have been converted to webp which has greatly reduced the file size.
Music has been added to the game
Tons of animations and images
Day 2 new evening scene
Day 3 Scene with Emily as a bunny
Remastered a large portion of the existing bunny scene
Day 3 Sam late night lingerie visit
Day 4 Alexa late night lingerie visit
The rest of the scenes happen on day 5!

0.1
Day 3 story content Sexbot
Three new characters are added to the story
The introduction has been reworked and expanded
11 new animations