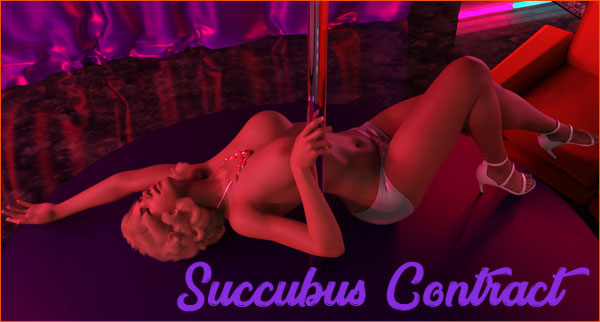 Succubus Contract this is the story of a guy who met a succubus because of his excessive lust. During the kiss, he didn’t realize it, he signed a contract with him and in the morning realized that he had turned into a girl. That’s how his adventure began. How will he take advantage of this situation? How will he get rid of the shackles of the contract? Where will the adventure road lead him and will he want to break this contract with the succubus? It’s up to you to find out.

v0.16.6
Absolutely the whole update version 0.16.6 is dedicated to the continuation of the storyline with Riel in the club. Earlier I thought I would give this branch 3/4 of the whole update, but then I thought it better to finish this event completely. That would then proceed to another storyline where there would be more lesbian content.

This update will continue MC’s adventure in the club with Rielle and his partner James. The options for her adventure depend on the choices made previously. And also, there are 4 different completions of this event, which also in the future will play a big role. So choose wisely 😉

v0.14.8
180 images
950+ lines of script
Fixed past bugs with invisible text and finalised the gallery.
The event with Riel
The event with Tom
The Dream World Event
University event

v0.14
202 images.
2000 lines of script.
Continuation of the story with Averia in the club
Continuing the story with Averia in her new apartment
MC can go home from the club and catch Tom off guard (very small, unfinished event)
New voluminous event in the dream realm
New characters (two orcs and one ogre)
Have you been saving up your lust, submission and dominance points? In this update you will need them, and they will affect the election
The Sleepy Kingdom is done in a fantasy style, with orcs, taverns, and one beautiful maid.
Minor bug fixes
Translation of the text is done using the new technology I wrote about earlier
Lesbian sex with a strap-on
Awesome renders

v0.11.4
700+ lines of script
106 images
Event with Averia
A small event with a mystery girl
Event with a stranger in a public place
Very small event with Mr. Steven
Redesigned main menu
GALLERY (In the future, I’ll add a description to each scene as to how it can be accessed. by default they’re locked, but now you can view the most interesting ones at any time)
Language selection on the main menu
Added music in a certain scene (I couldn’t find suitable music for the whole game but I’m working on it)
Character prompts (in progress)
The new menu is more convenient for those who play on smartphones and tablets.

v0.10.9
1,200 lines of code
160 images
Bug fixes (Riel, now not Rector. And other minor bugs)
Added 4 new characters
Narrative system changed (MC is now practically narrating in his own voice)
Translator, corrected the translation of the new part taking into account all comments, tips and suggestions.

v0.8.8
500+ lines of text
83 images
Scenes that were not included in the previous public release Succubus Contract.

v0.7.9
600+ lines of text
107 images
Sex scenes with Tom.
Fixed bugs with «forced scenes»
Bug fixes have been made to the Russian version of the game.
Added «playthrough» in the game folder

v0.7.2
Added 175 new images
1200 lines of text
Events with Avery and Wilson
Added «characteristics bar»
Sex scenes have been added, which depend on previous elections.