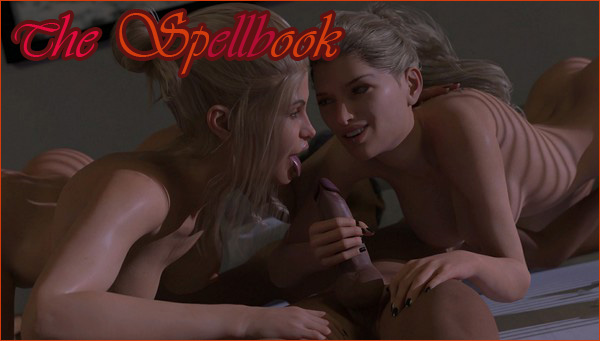 The Spellbook — a book that was found by mistake. A spell that was cast by stupidity. Shall be the beginning of an adventure! Will you let things go out of hand? Will you use it to all the women around you? Make them fall in love with you? Play it now and make your choices!​


Changelog
v0.19.0.5 Love Route Part 2
Hello everyone, It’s Sinburn.
Firstly, let me start with an apology. We hoped to get through to our first ending in this release but we got so involved with an emotional goodbye that we didn’t make it. We were underestimating how many renders it would be to get through to the end but we wanted to squeeze in a generous helping of sexy times for the endings and there was no way for us to get all that sexy goodness out on time. Not without breaking Rocco that is.

This is part two of this month’s love update.
This update leads us to the last big choice. From here it’s all endings. I’m not going to promise things right now as to what we will get done next. Rocco and I need to sit down and plan out what we think we can get done but it will be on the NTR route.

0.18.5.0 Dark Routes
Hey guys,
This is an episode you guys dont want to miss… I dont want to spoil too much but… Lets call it special! Something we have been waiting for is finally happening!!!

v0.13.25.0 Dark routes
We managed to make 136 renders per route (272 in total), 7 videos (total) and wrote about 6k words in dialogues.
Make sure to play through both routes available to play all the new scenes!

v0.11.5.0 Dark Routes
+16k words
+41 animations
+266 renders
This episode consists of 2 huge acts. The third was cut because our PC would not make it in time, furthermore we added some out of this world animations in this update. Even the toughest judge will be amazed.

v0.11.0.0 (Love) Released!
Another huge episode is delivered today, with many sub-routes to explore and lots of fun to be had! This episode has futures all the girls but Aria. Worry not though Aria fans because we will make sure to focus a little more on Aria in the next Love update!
We also didn’t add the Michael path. We will add it next update!

v0.8.5.2
7000+ Words
279 Images
21 Videos
Furthermore, this months update is in love route!!! Where, finally we will see some more of Nancy and Aria this month as last 2 love updates where focused on Kelly and Aurora!

v0.7.5.0.0
Overall we The Spellbook added:
+ 203 images
+ 5 animations
+ 2 sub-animations (for the cellphone screen)
+ 7000 words
Furthermore, next Update will be on Love route and it will be amazing! As Jack will meet a very important character and learn more about the book. This, with the right choices might slowly lead Jack been extremely powerful!