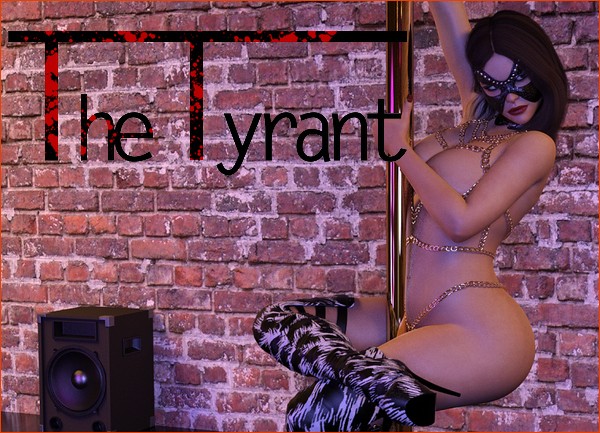 The Tyrant — what or rather who is this game about? The name speaks for itself. Although you will have a choice of demeanor, the main character can become a good girl and no one will forbid you to start a tender romantic relationship. The other side of the coin is to be an asshole, take everything from life in full, earn money on girls, corrupt and force them, fuck everything that moves. The choice is yours!


Changelog
The Tyrant v0.9.4
— weekend trips (love) for Nicole and Alexis
— weekend trips for Nicole, Alexis and Cassandra (NTR). Just go on a corruption or love trip with them and have to low relationship and their other NTR events before, see helper.
— A new event with Cassandra when she‘s your basement slut (corruption, 9am)
— more training with Cassandra before she have her second event in the basement (corruption, 9am)
— a event in the parents room at 7pm after you told Bruce to get his hands off Nicole
— some repeatable events won‘t occur anymore when a character has passed a certain point. The repeating at this point won‘t make any sense. (for example the meeting of Martin at the front door at 2pm)
— some repeatable event are reworked, so the haven‘t the same text every time
— you won‘t lose relationship points any longer when NTR is off (that makes no sense then)
— the shaky relation events are gone, that experiment was crap
— bugfixing

The Tyrant v0.9.1
— 1 new event with Nicole pregnant in the shower at 3pm (love and corruption)
— 1 new event with Nicole pregnant at the parents room at 7 pm (love/ the missing one from 0.9)
— 1 new NTR event with Alexis, 2pm at the secret place
— 1 new city event for Nicole, Alexis and Cassandra on the weekend (corruption), look in the helper for requirements
— 1 kill option for Davide, can fail in NTR with consequences (trigger automatically after the important Bruce event, more info then in the helper too).
— the contact info menu got more details, like a babycounter and some other stats, accessable by clicking the images in the contact menu on the phone.
— fixed some bugs and typos (couldn‘t reproduce a sleep-bug, maybe need further investigation)

The Tyrant v0.8.5
— 1 extended event with Alexis at 9pm in her room (need 20/40 love or corruption) to see all
— 1 new event for Cassandra and for Nicole at 4 pm in the basement for love/corruption and NTR paths (Love and Corruption paths are in the helper, for NTR do it once in love or corruption path, then do it again with low relationship)
— 1 new event with Bruce. This triggers automatically, when you get Cassandra or Nicole to a certain point on their love or corruption path. (Just play one of their paths to the end).
— Finished all clothing events. Cassandra will at one event wear only their level 1 clothes, when she came home, and when a girl still wears her normal clothes, it‘s supposed to be for that event that they won‘t change their clothing.
— Fixed some bugs and updated the helper. The NTR night events with Alexis and Nicole will now rotate randomly, at some point it was not possible to see both of them.

The Tyrant v0.7
— the love options for Irina’s date
— the second lesbian date between Alexis and Irina (with NTR also, but only for the NTR path of course), Note: the event before in the players room must be done again, I forgot to set a trigger.
— a new animation (when you have sex with Alexis at her love date)
— adding a option to name your saves
— set the frames to transparent, so there’s no background on the text anymore (more to see from the images)
— the messenger, which you can use to find events or go on dates and receive messages
— adding some images, for giving gifts were some missing
— fixing some bugs (not all, others will be done with the script-patch)
The messenger itself need some polishing (also script-patch), but it’s working for the planned things. And there’re some changes, you’ll get a invitation through the messenger for the following events:
— Dates with Irina
— The new lesbian date
— The NTR date between Davide and Alexis at the secret place (weekend)
— The NTR subway event with Nicole (weekend)