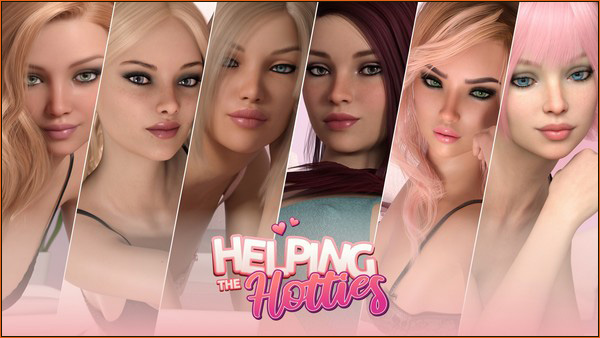 Sex game Helping the Hotties (Red Falls) from developer xRed Games. You are a college student madly in love with your girlfriend, but instead of spending summer with her, you receive an unexpected phone call. Next day you’re on a bus going to work in a boys educational and misbehavior camp, but to your surprise it’s not boys camp anymore…


Changelog
Helping the Hotties (Red Falls) 0.8.9
0.8.9 with English VO is now LIVE!
Helping the Hotties (Red Falls) is updated with full English voice over, each girl voiced by a talented voice actress, giving each of our Hotties another layer of character and immersing you even deeper into the story and everything that’s happening.
Did you ever wonder how Belle sounds when she’s teasing? How does stern Eve sound? Or how loud Naomi can become?

We’ve added a VO button to the quick menu with which you can replay the VO. It’s accessible by simply pressing R on your keyboard (you can replay Stacy’s meowing during the lake scene to your heart’s content).

We know some of you guys have their own idea of how each girl sounds and their voice etched in your mind. We don’t want to impose what we believe are some really great VO, so there’ll be an option to “mute” each girl who’s VO you don’t prefer.

With this version, Helping the Hotties is also finally available to play in Chinese!

That should cover everything coming with 0.8.9. right? Oh, we also added a bunch of ingame achievements and missions. You can earn achievements and unlock the rewards they hold in a single playthrough, while the missions require multiple playthroughs to finish. But the rewards are well worth it and everything you’ve unlocked can be found in the Gallery under Rewards!

Red Falls Episode 5
The new episode features more than 1422 new renders, 81 new animations inside the story, and more than 300 renders in the gallery, Blinks, Angles and X-Ray images!
Patreon Code:fire

Red Falls Episode 4
Hi everybody,
Episode 4 is finally out! 1110 new renders, 29 new animations inside the story and more than 300 gallery, angles and x-ray images!

Red Falls Episode 3
Hi everybody,
Red Falls Episode 3 is finally out! Another record is broken with my biggest update of 1566 renders inside the story and almost 500 angles and x-ray images! Also new is:
Angle and X-ray buttons: Will be only available to $10 Patrons (in testing phase)

Red Falls Episode 2
Red Falls Episode 2 is out and its hot if I may say so! This is my biggest update to date with 1379 renders in total! I’ve also added new mechanics into the game:
x-ray: When you see the «x-ray» button in the upper left corner, click on it and… well enjoy 🙂
Angle button: On some images you will see two arrows click on them to change the angle of the image. (Sometimes a bit more than just an angle…)