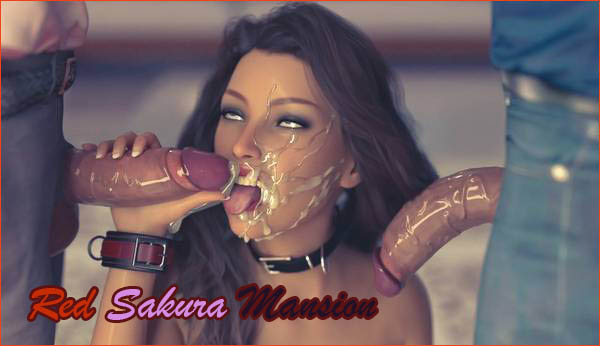 Red Sakura Mansion — you get a huge mansion, but what if you do not have money? What you gonna do? That’s right, seduce and enslave beauties, train them and turn them into whores, earn money on them and live like a king!

Red Sakura Mansion v0.10
So here the next version of the best game in the world 🙂
The first and most important thing I wanted to say: I have almost studied Renpy and will soon start migrate RSM to this familiar engine that works not only on windows but also on macOS, Linux and Android
I think that it will take me a lot of time and I will think about how to do it quickly.
One of the ideas is to start doing the Red Sakura Mansion 2 and all new quests i wiil do on Renpy, and step by step migrate past chapters to the new engine

So, i think it was the last release on Tirano engine:
As I said earlier, this is not a very big update, but very interesting!
So, features:
— As before, if you don’t want to play from scratch, use button on title screen «Start from Pamela Storyline» you don’t need old SAV file
— added some new orders on castings (more than 70 new renders)
— added 1 animation on casting (for Sofia on Fuck Machine)
— Now when you buy some items, Maya will show them or demonstrate how it works (still in progress, finished only for some items) (30+ new renders)
— New character: Officer Lane (10+ new renders). She will come to you at certain intervals The officer will come to you 5 times, (just keep making money from casting)after that the continuation will be in the next release
— New location: a Strip Club (25+ new renders) Still in progress but but now you can have fun with your slaves there
— If you play from the start, Naomi and Chloe can be taken to the club after reaching level 14 and Pamela after level 6. If you start playing using «Start from Pamela Storyline» button (from title screen) you can fun with all your slaves straightaway
Bugfix

0.9.1a
— Earning system has been completely changed. Now this is a webcam casting
— Added 10 webcam characters
— Added 2 new Pamela quests
— Added more than 300 new renders
— Added 7 new animations
— Changed Naomi storyline, now the character is more modest and has more personality
— Added alternative branches to some of Naomi’s quests for those who don’t like sharing slaves.
— Added: when buying the latest device, you can test it directly in the store
— Changed prologue
— Fixed some bugs

What will be in the next release:
— Add new orders for webcam models
— Make model dialogs more personal
— Add testing of most devices when buying

Changes:
Mansion and gift button removed. Now you need to buy items and upgrade the mansion on the city map. Items can be found in the «Sex shop», and furniture for the rooms in the «Store»

Red Sakura Mansion v0.5
— Proofreading all dialogs — Thanks to everyone who helped me
— Added 8 new quests
— More than 300 new pics added
— The system of earnings has been changed. Now it’s casting. Take pictures of girls and make money!
— Added 15 new simple animation
— Fixed bugs
— You must start the game over, saves from the previous version of the game will not work
— Chloe’s storyline is not finished, because it will be much longer and more interesting than Naomi’s storyline